Grundfos pumps play an important role in preventing over height trucks from entering the Sydney Harbour Tunnel. A stop sign made of water and light gets the job done. 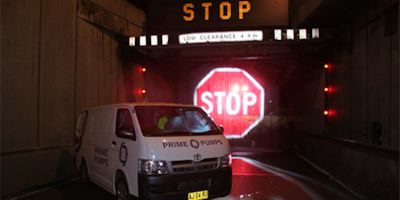 It seems to materialize out of thin air, directly in front of your car. It is called a Softstop and it utilizes a combination of water and light projection. Unlike conventional warning lights, signals or signs that appear in the peripheral vision of drivers, the Softstop Barrier System is the only visual messaging system that appears in the direct view of drivers. Therefore it is almost impossible to miss.

"The Softstop Solution and Grundfos pumps have proven to be highly reliable", says General Manager Bob Allen from the Sydney Harbour Tunnel company.

Hunting for a solution

With more than 90,000 vehicles using the Sydney Harbour Tunnel per day it is a crucial junction. Therefore delays and closures are very costly for the Sydney community as the tunnel is a key access route for the city’s business district and eastern suburbs.

For years the Sydney Harbour Tunnel company has been hunting for a solution, which could prevent over height trucks from entering the tunnel. Traditional stop signs have showed not to be a success, but one day Bob Allen found out that the Australian company Laservision could help him out. The creative technology company, which normally designs different kind of lighting, teamed up with Grundfos to make a stop sign made of water and light. It was decided to use two Grundfos NB End-suction close-coupled pumps operated by a Grundfos variable speed control panel, to ensure smooth performance of the pumps, and fed by a large 15,000-litre water tank.

The Softstop Solution has proven its worth. As over height trucks enter the road leading to the tunnel entrance, they pass through a series of five warning signs and ultra-red beams with the latter sounding alarms in the tunnel control room. If drivers ignore the last of these, the controller presses the Softstop Solution start button. The screen and sign appear within three seconds and are enough to make most people stop immediately.

"The sign was activated 18 times last year, says Bob Allen and explains "Eight hundred and forty-two over height trucks entered the road leading to the tunnel, and all but those 18 had taken exits off the road by the time they passed the fifth warning sign and beam. Without the Softstop Solution, I hate to think how many of those 18 would have entered the tunnel, perhaps forcing it close down for hours at a time. 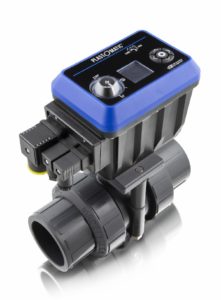 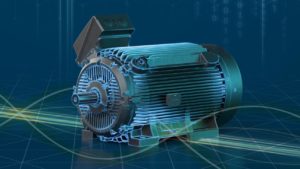