Voith Hydro has been awarded to overhaul three hydro power plants in Italy till the mid of 2016. The value of the three awards sums up to a total of around 16 million Euros. The modernization projects will safeguard 13 megawatts of renewable capacity to the Italian grid for many decades in the future. 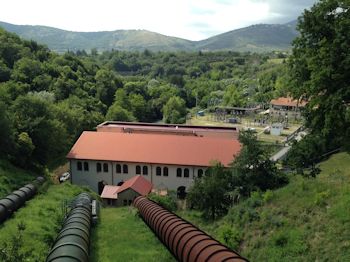 For ACEA S.p.A., Voith will modernize the plant “Alessandro Volta” in Castel Madama, Rome province, which went to the grid first in 1915. Voith will supply the complete equipment for the two power generating units (4.5 and 2.7 megawatts respectively): Francis spiral turbines, generators, the respective governors, automation and balance of plant.

Two modernization projects have been awarded by BKW Italia S.p.A., member of the BKW Group, one of Switzerland’s largest energy companies: Pompegnino, in the province of Brescia and Pont St. Martin in the province of Aosta. Pompegnino project will have its two vertical Kaplan-turbines, of which the first was installed in 1927 (1.1 megawatt each) overhauled by Voith. Moreover the company will supply new according generators, hydraulic governors, the automation and electrical balance of plant. For the Pont St. Martin plant, Voith will replace the four horizontal Francis units, generating 2.53 megawatts of electricity since 1932, with one new vertical seven-bladed Kaplan turbine (3 megawatts) unit and one horizontal Francis machine (600 kilowatts). Again, Voith’s scope of supply includes turbines, generators, hydraulic governors, the automation and electrical balance of plant. The revamping projects represent a further strengthening of BKW’s hydro power commitment in Italy.

It is the outstanding longevity of the plants that is the core of hydro’s remarkable long term profitability and makes hydro stand out as a longseller for its investors. Modernization and overhaul will allow these plants to generate electricity from renewable sources for decades again. A great asset is the possibility to use the already existing civil structures: practically no new infrastructure is needed. This keeps low both environmental impact and need for new investment.

Hydroelectricity has powered not only Italian, but also overall European economy and its industrial rise since the turn from the 19th to the 20th century. Through modernization this fleet can continue to supply electricity for the future. As a recent survey highlights, 90 percent of the European Energy experts think modernization and expansion of existing hydro schemes should be the priority for politics in promoting hydro power adequately.