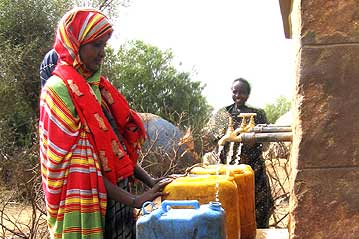 Providing the minimum amount of water for survival in the often chaotic initial stages of a refugee crisis can be difficult. Multiply this by 110,000 refugees and consider their location on the fringe of the Sahara desert, and things get even more complicated.

The quest for water for Sudanese refugees in the arid environment of eastern Chad has involved trucking thousands of litres of water from nearby towns, flying in dozens of tons of drilling equipment to the remote region, drilling boreholes, digging wells and scouring vast expanses of terrain to find potential camp sites with enough water to support thousands of refugees.

Availability of enough safe water can mean the difference between life and death for people forced to flee their homelands. Refugees need water for drinking, cooking, washing, and eventually for growing food to supplement their diet or supporting livestock to help them earn a living.

While the search for water continues in eastern Chad, elsewhere around the world, UNHCR has also been making progress in providing clean water to refugees. In the past year, UNHCR has constructed more than 3,500 water points in Afghanistan which provide water to hundreds of thousands of returnees.

In eastern Ethiopia, a decade of work to improve water supply is finally bearing fruit in a refugee-hosting area regularly devastated by drought. A full-fledged sustainable water distribution system now supplies water to 210,000 people, including the local Ethiopian population and some 30,000 Somali refugees in camps. A 22-km-long pipeline complete with pumping station and purification system, the first of its kind for the eastern Ethiopia region, brings water from the Jerer Valley to the camps and local communities. The pipeline connects a reservoir in Kebribeyah to a distribution system of 24 tap stands in the Kebribeyah refugee camp.

Water from the reservoir is also trucked to refugees in nearby Hartesheik camp, which is not serviced currently by the water pipeline. Together with a new well field, the water system has developed the region's groundwater potential, which will serve as a lasting positive legacy long after the refugee situation is over. At the same time, Hafir Dams – large, shallow retention basins originally developed in Sudan but successfully brought to Ethiopia – maximise the scarce rainfall by storing water during the rainy season.

Thanks to contributions of funds and technical support from Swiss-based food and beverage giant Nestlé, the Jerer Valley Water Project has been completed and will be handed over shortly to the local authorities. While particularly skilled in their field, the local water authorities lacked experience with this type of water system. Nestle's technical advice and sharing of knowledge has boosted the local expertise to take over the Jerer Valley system from UNHCR at the end of 2004.

Meanwhile, in Eritrea, water proved a key element in transforming the village of Dressa, which received over 2,000 Eritrean refugees coming home from exile in Sudan. In this part of Eritrea, prolonged drought and damaged infrastructure devastated by 30 years of war mean that many towns and villages exist on very little. For the former population of 300 people in Dressa, water supply consisted of wells dug by hand in the seasonal riverbed. It was common to see people going about their daily lives with water containers always at hand to scavenge water from whatever source they might come across.

This way of life changed dramatically when, in 2002, the village suddenly grew 10-fold with over 2,000 Eritreans choosing Dressa to return home to with UNHCR's voluntary repatriation programme.

Emergency water was trucked into Dressa from Aklalet, another recently established returnee village some 30 km away. This solution addressed the increased water demand immediately but could not be sustained long-term. With the help of the government of Eritrea's Water Resource Department hydro-geologists, drilling contractors and the Eritrean Relief and Refugee Commission (ERREC), three boreholes were drilled and handpumps fitted.

However, the water yields were not enough to provide for all in the enlarged village, and so water trucking was still required.

Dressa frequently became cut off from the road during Eritrea's annual three-month rainy season, leaving water trucks stranded between the two villages and often for several days. The people of Dressa resorted to rationing water supplies and collecting water from traditional sources.

Dressa and its people were at a critical point. A lasting solution had to be found for the populated area to fully utilise its agricultural potential. The town is located in the heart of Eritrea's "breadbasket" region, the fertile black cotton soils supporting high yielding sorghum, millet and sesame crops.

In 2003, UNHCR investigated the town's groundwater possibilities and drilled another three boreholes 2 km from Dressa. This time the yield was sufficient to meet the town's current and future needs. In fact, the additional groundwater supply could accommodate a further 2,000-plus returnees. A submersible pump, generator and water hydrant were subsequently installed, finally allowing a reliable water supply to be trucked close by. Water is now available near people's homes, trucked to six water bladders connected to tap stands.

As the rainy season fast approaches again in 2004, UNHCR has continued to look for a durable water solution for Dressa. An integrated water supply and distribution system is currently being designed for implementation in 2004, making water trucking obsolete. The system will consist of:

The aim is for groundwater to be pumped from the existing bores to an elevated tank, and then distributed by gravity to the public water fountains.

From the outset, the community has played a leading role by establishing a water committee in 2002, made up of both men and women. They have effectively managed and adapted to the demands of providing water for their enlarged community, and recently planned the location of the elevated tank and public water fountains.

This once small village of Dressa is now on the verge of becoming one of the strongest thriving agricultural towns in the region, providing its inhabitants with reliable high quality water, and enabling them to plan their future with certain confidence. The potentially increased agricultural output will enhance their livelihoods and those of the greater regional community.

On World Water Day, UNHCR and its partners around the world will strive to provide at least the seven litres of water per refugee, and the quest will continue tomorrow.