Lowara presented the new SV33-92 Series vertical multistage centrifugal pumps to its leading commercial partners in Australia and New Zealand during the month of May. The new range was displayed both in Adelaide at the ...

Lowara avails of the services of ITT Fluid Technology International Australia based in Melbourne and a number of local distributors, Brown Brothers Engineers, Lowara Pumps Queensland and Pumpquip for the distribution of its products in the Australian and New Zealand markets.

The Irrigation Agriculture Australia Show held every two years is the region’s most important irrigation and agriculture showcase. The ITT Fluid Technology International stand featured the new SV Series pumps that were officially launched at a special event organised by Pumpquip at the Adelaide Convention Center with the participation of numerous clients and retailers. In addition to the new SV range, the stand placed other Lowara (residential, borehole, sewage and variable speed sections with Hydrovar and Teknospeed) and Goulds products (split case, ISO centrifugal pumps) on display.

Collaboration with local distributors and activities for the insertion of the new range continued with visits and participation in conventions in Sydney and Melbourne organised by Brown Brothers Engineers, and in Brisbane organised by Lowara Pumps Queensland.

The new pumps were regarded with special interest by those present and some participants even placed orders for the new range at the end of the presentation.

After a brief company profile, the new SV range was presented in detail through an initial theory session that illustrated its main features and improvements followed by a hands-on phase in which the pumps were disassembled to reveal the elements of greatest innovation (such as the possibility to quickly change the mechanical seal without disassembling the pump motor).

The new range then went to New Zealand, where it was proudly presented in the cities of Auckland and Christchurch with the precious assistance of the local offices of Brown Brothers Engineers.

Activities like these help consolidate the image of Lowara around the world and create new business opportunities in geographical areas where close partnership with distributors is extremely important. 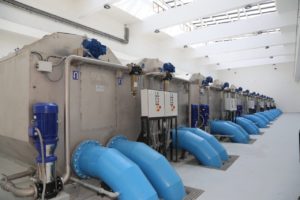 High efficiency pumps play a central role in Egypt’s Al Mahsama agricultural drainage treatment, recycling and reuse plant. Built on the banks of the New Suez Canal in Egypt’s Sinai region, the USD 100 million Al Mahsama water treatment facility is the largest of its kind in the world. 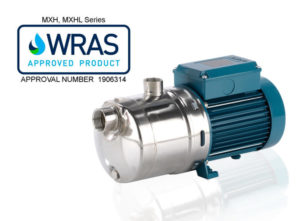 With the MXV and MXV-B vertical multi-stage pumps approved, as part of the 5 year renewal process for MXH models Calpeda has added larger pumps and the MXHL series to the approval list.