Sedimentation, however, can be a major problem in detention basins. A treatment plant in Belgium solved this problem using Xylem’s technology and engineering expertise.

Urban areas are particularly vulnerable to severe weather. In cities surfaces are less permeable, so stormwater run-off increases, leading to a greater risk for flooding and combined sewer overflows. Stormwater detention is one way to solve this.

Stormwater detention not only helps prevent floods and combined sewer overflows, but it can also ensure that critical processes like treatment can be performed. It is an optimal control solution to regulate stormwater flow, and it can be implemented in many different ways. These include infiltration tanks, deep detention tunnels and alternative systems like the SMART tunnel in Kuala Lumpur, which is a combined motorway and stormwater tunnel. Stormwater detention also comes with a set of challenges, mostly related to sedimentation and cleaning.

Belgian challenge: Sludge build-up in detention basins
One of the stormwater detention projects that Xylem recently completed was at a sewage treatment plant in Rosières, Belgium. The plant – operated by the Intercommunale of Walloon – is the second biggest plant in the region, treating wastewater for more than 100,000 residents. The plant managers were experiencing persistent problems with sludge build-up in two stormwater detention basins. The plant’s detention basins were created to buffer the community from a surge in wastewater flow due to storms, and they had recently been renovated to comply with the latest European standards. However, problems in these two basins continued to cause plant malfunctions, which became a real challenge for the managers of the facility. The main source of problems was that the stormwater run-off carried fine sand that made the water abrasive. The sand impacted the continuous mixing of the sewage, which is necessary to treat the excess sludge. This caused a build-up of sludge in the bottom of the two detention basins. It also made the cleaning of the basins problematic and expensive, as tankers and expensive draining solutions were needed to manage the sludge.

Improving the mixing and cleaning capacities of the basins
Working with the Intercommunale of Walloon and a team of civil engineers, Xylem helped develop an engineering solution that improved the basin’s mixing and cleaning capacities. New air-water ejectors equipped with hard-iron impeller pumps replaced the failing hydroejectors previously installed. These are designed to flush sediments from the bottom, create a bulk flow, suspend particles, and ultimately deliver more homogeneous mixing.

Design and maintenance improvements to prevent sedimentation
The design of both basins was reviewed to define how to best influence the different phases of mixing, draining and cleaning. This resulted in the integration of a drain pit at the edge of each basin, as well as a slope of 1 percent on each bottom to decrease the risk of sedimentation-related problems – especially during extended dry periods. A consistent operation and maintenance program for cleaning was also implemented to deliver optimal performance. This detention project successfully improved wastewater and stormwater treatment for the entire Walloon Brabant region. The region’s sewage system in now much better equipped to manage future storms and stormwater. 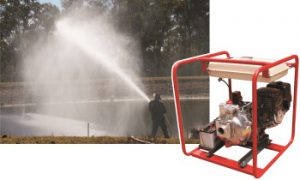