Semiconductor manufacturers will spend $2.3 billion in 2012 for flow control and treatment products. This includes products used to extract water from sources, purify it for use in chip washing and other purposes and to purify effluent prior to discharge. 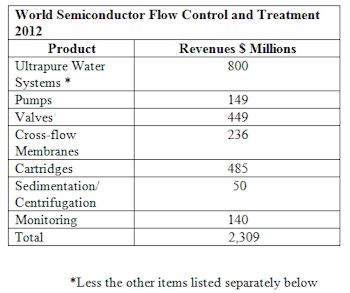 These totals are based on extracts from six McIlvaine market reports.

The water used in semiconductor processing needs to be extremely pure. Water from a river or even water already processed in a municipal drinking water plant must be subjected to a series of steps which often include granular media filters, cartridges, reverse osmosis, ion exchange and degasification. The water must be carefully monitored for a number of parameters. For example, dissolved oxygen must be measured and controlled at a few parts per billion.

One of the recent design changes is to reuse water where possible. Rinse water which was delivered to a tool but not used, can undergo less stringent treatment than water that was used as incoming plant water.

The semiconductor industry is growing at rates faster than GDP thanks in part to photovoltaic production as well as mobile communications. Asia is the largest producer. Its lead is forecast to grow. China is gaining on Korea, Taiwan and Japan as a major producer.

The demands for even more pure water are increasing as the line sizes on the chips are decreasing. This aspect coupled with the opportunity for water reuse are creating new opportunities.