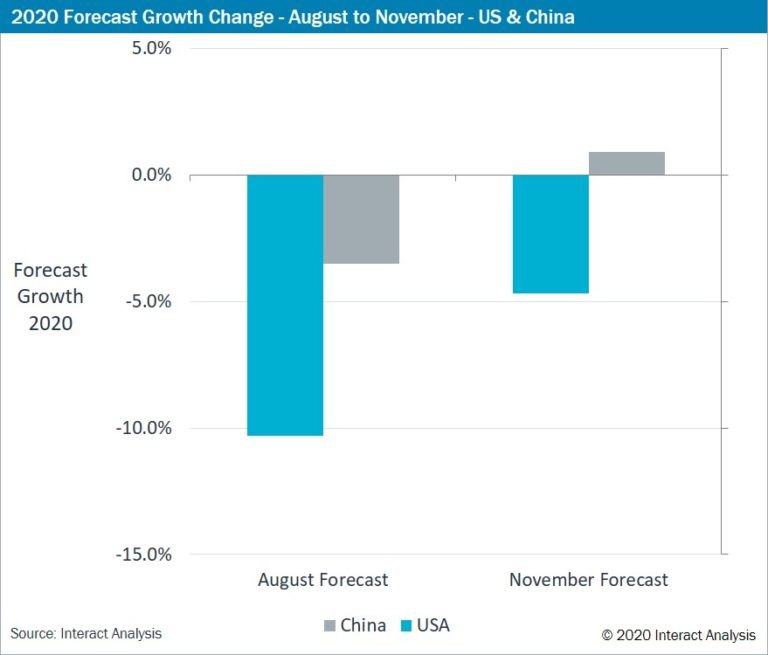 The latest update shows a notable upward revision to key manufacturing economies, with both China and the US being much less impacted than previously predicted. This quarter’s update report is available free to all.

The research shows that the -10% contraction previously forecast for the US in 2020 has been reduced by more than half. This is largely due to the fact there have been no lockdowns, so while the virus has raged, manufacturing production has continued. China, whose government operated a stringent regime of virus-control, is now forecast to see a small amount of growth, of the order of 0.9% in 2020. Other Asian economies have fared better than expected, but the forecast for Europe remains roughly the same. As a result of these reassessments, the global forecast of negative growth for 2020 has been revised down from -7.8% (predicted in August) to -4.8%, and global manufacturing output is now predicted to surpass 2019 levels by 2022, rather than 2024. While radical, this reset is based on evidence collected on the ground by Interact Analysis’s team of experts.

Where specific manufacturing sectors are concerned, all except aerospace will return to 2019 levels by 2023, and most will burst through the barrier in 2022. Strong performance in APAC regions means the semiconductor industry is now forecast to surpass 2019 levels this year, rather than in 2021, and monthly indicators from Eurostat and the US point to a far swifter recovery in the textiles sector than previously forecast. While aerospace is predicted to struggle over the medium term, automotive, another major sector hard-hit by the pandemic, is now predicted to surpass 2019 levels by 2023, rather than 2024 as previously forecast. The post-COVID stimulus packages, provided by European governments, often supporting their push towards hybridisation or full electrification of vehicles, is a factor here.

Adrian Lloyd, CEO of Interact Analysis, says: “Is there light at the end of the tunnel as far as manufacturing is concerned? Interact Analysis’s updated MIO Tracker gives good reason to think so. For me, it is particularly interesting, yet at the same time in hindsight perhaps also unsurprising, to see that the US’s ultra-lax virus controls appear to have resulted in improved performance for manufacturing; surpassed only by the performance that has been delivered by China’s ultra-strict approach.

“I am also excited to announce to those of our clients doing business in the Latin America region that, as of this update, Interact Analysis’s Manufacturing Industry Output tracker now includes Argentina – the third largest economy in South America. Finally, as a leading industrial market research agency, we want to do our part to help the industrial sector get back on its feet. That’s why we’ve made this quarter’s update report from the MIO Tracker free to all [...].” 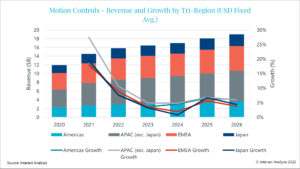 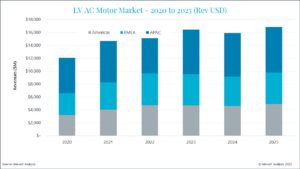 New research from Interact Analysis shows that the low voltage motors market saw the highest revenue growth in living memory during 2021, driven by historic price increases as a result of supply chain disruptions. Growth in unit terms of 6.6% was much more in line with the broader rate of recovery seen in the manufacturing sector globally. 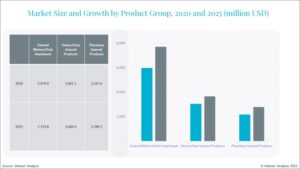 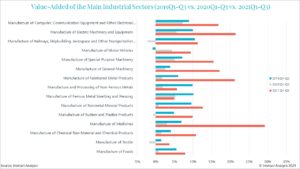 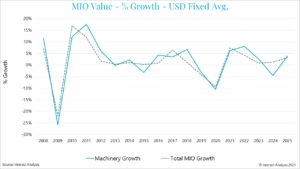