Nairobi City Water & Sewerage Company and Grundfos signs an MoU, which allows the parties to build a sustainable water network for the growing African metropolis. 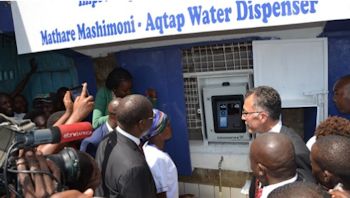 Access to water is among the greatest challenges in Nairobi. At the moment the city is home to 4 million people and the population is projected to grow to 6 million in 2025. To support the escalated need, an expansion and modernization of the water network is required. Nairobi City Water & Sewerage Company (NCWSC) and Grundfos are joining forces to support this. The parties have just signed a Memorandum of Understanding (MoU) formalizing the cooperation. It is the first public-private partnership of its kind in Africa, which Grundfos takes part in. Among other things it builds on Grundfos Lifelink solutions such as the newly developed Grundfos AQtap, a fully automated water dispenser, which has now been installed at four sites in the informal settlements of Nairobi.

Affordable water to the slums

Governor of Nairobi County, Dr. Evans Kidero, attended June 22nd the official opening of one of the four, refurbished water kiosks at an event connected with the MoU-signing.

“Partnerships like this ensure access to financial stakeholders as well as the technological know-how necessary to not only increase the accessibility of water services, but also making them affordable,” says Mr. Kidero and adds:

“They will benefit the community through reduced water costs, minimise management challenges and reduce water loss while increasing revenue for the company (NCWSC ed.). Thereby it can facilitate expansion of the water and sewerage services in the city’s informal settlements.”

Philip Gichuki, Managing Director of Nairobi City Water and Sewerage, expresses his happiness with the new partnership as well:

“It has been very inspiring to work with the Grundfos personnel, who has shown great passion for improving water accessibility to the poorly served population in the slums. The new technology will enable us to reduce water loses and thus reach more people with the same level of water production,” says Mr. Gichuki.

For Grundfos, the agreement holds several interesting possibilities. Rasoul Dashtbani Mikkelsen, Global Partnership Director at Grundfos Lifelink and Deputy General Manager of Grundfos Kenya David Githendu, have been key stakeholders in getting the agreement to fall into place. Mr. Githendu highlights the benefits, which come from the close connection to the Kenyan water utility:

“This gives us a unique opportunity to get to know the needs of a large water utility from the inside. At the same time, it brings us close to a potential business partner, who is aiming at growing its capabilities in scale and technology alike over the coming years. And already now, a lot is up for grabs: for instance, in Nairobi, there are 4,000 water kiosks, which could be equipped with the AQtap, so we’re looking forward to follow the development closely,” Mr. Githendu explains.

The MoU was signed at the Danish Embassy in Nairobi in the presence of Ambassador Gert Aagaard Andersen, who was happy to take part in the official establishment of another connection between the Danish and Kenyan companies. Previously, the Kenyan minister for environment, water and natural resources visited Grundfos headquarters in Denmark and was introduced to the company and its competencies.