The power industry will spend over $22.8 billion in 2014 for equipment and chemicals to transport, treat and control water and wastewater. This is the conclusion reached by McIlvaine through aggregating forecasts in nine of its market reports. 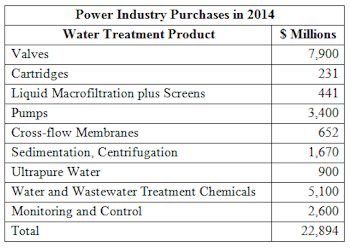 These expenditures will be generated by coal, nuclear, gas and hydro plant operators. The biggest expenditures will be made by generators firing coal. They have the largest cooling, feedwater and wastewater quantities. Coal plants use more water than all the other industries combined. The intake water from rivers, lakes and wells must be treated before being used for cooling. Further treatment to make it ultrapure is needed for the smaller portion used as boiler feedwater. Where the dust and bottom ash are sluiced, there are additional water needs. When scrubbers are used for SO2 capture, large quantities of water are needed. The resultant wastewater has substantial contaminants including metals. There are regulations in most countries requiring treatment of this wastewater. These rules are becoming more stringent. In the U.S., a new proposal would replace a rule issued in 1982.

Last week the U.S. Environmental Protection Agency proposed a range of options to help reduce pollutants including mercury, arsenic, lead and selenium that are released into America’s waterways by coal ash, air pollution control waste and other waste from steam electric power plants. Compliance with the proposed regulation would be economically achievable, with an associated annual cost for the proposed options between $185 million and $954 million. One of the options will be zero liquid discharge systems. These systems purify and return all the wastewater for reuse in the power plant. The waste is reduced first to concentrated slurry. Evaporators then drive off the water resulting in a dry waste product.

China will be the leading purchaser of power plant water transport, treatment and control products. This is due to the continuing rapid expansion of its coal-fired capacity as well as its continuing nuclear program.

Valves will be the leading product category with revenues of just under $8 billion. Water and wastewater treatment chemical sales to the industry will exceed $5 billion. This includes corrosion inhibitors, biocides, flocculants and many other types. Pump sales to the industry will be $3.4 billion. This includes the large recirculation pumps which move limestone slurry to SO2 scrubbers. Monitoring and control purchases of $2.6 billion include analyzers for contaminants, pH, flow and other physical and chemical parameters as well as the DCS, SCADA, PLC and advanced process optimization systems which control flow and chemical additions. 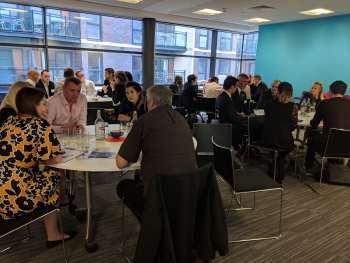 The water sector should be at the forefront of the UK’s artificial intelligence and data revolution, according to Ofwat.