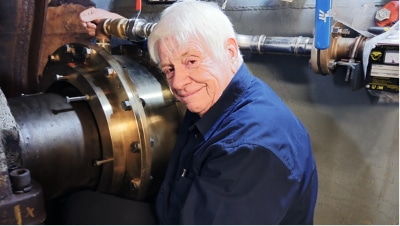 “I am deeply honoured and humbled to win this award, which I accept on behalf of everybody at Thordon Bearings,” said Sandy.

“To be presented with this prize is a testament to the talent and dedication of all those working tirelessly within the company to develop safer, more environmentally-friendly solutions for all sectors of industry. It really is a collective effort rather than any one individual. It is our material scientists, technologists and engineers – some of the best in the world – that must take all the credit.”

Sandy is a native of Burlington, Ontario, Canada and is the second Canadian to win this prestigious award. He studied aircraft maintenance at Northrop University in Inglewood, California and graduated as a mechanical engineer. After a brief stint working for a Boston-based mechanical seal manufacturer, he returned to Canada to join Thomson-Gordon Ltd, founded by his grandfather in 1911.

The prospect of producing engineered components made from elastomers intrigued Sandy, so along with Dr. Pande and Dr. Bill Allan they developed the Thordon polymer in the late 1960s. After several prototype bearings, the world’s first polymer alloy bearing was produced and installed in 1967 into a vertical pump, in partnership with a local steel plant, replacing traditional rubber bearings that typically wore out within a few weeks.

Early on Sandy saw the potential for a wide variety of markets for the new polymer, and after the successful installation in more vertical pump applications, the marine market on Lake Ontario seemed like the perfect place to test the bearing in horizontal applications. The world’s first Thordon water lubricated propeller shaft bearing was installed on a Great Lakes tug owned by McKeil Marine in Hamilton in the late 1970s. Today, McKeil is the largest tug/barge owner on the Great Lakes and still a loyal customer 40 years later.

The advantages of Thordon polymers were quickly adopted by ocean-going vessels, with hundreds of ships, including cruise ships and container vessels installing Thordon seawater-lubricated polymer tailshaft bearings. One significant breakthrough was supplying propeller shaft bearings to the Royal Canadian Navy - Halifax class frigates, which had originally specified rubber bearings that turned out not meeting expectations. However, the products from Sandy’s newly-formed company – Thordon Bearings Inc. – solved the problem. Since then over 40 global Navies and Coast Guard fleets have chosen Thordon’s COMPAC propeller shaft bearing system. Based on the proven operating performance on cruise ships, COMPAC bearings are now offered with an unprecedented lifetime bearing wearlife guarantee.

Sandy’s pioneering work in eliminating a major cause of ocean pollution – oil leaked from conventional oil lubricated tailshafts – has prevented millions of litres of oil leaking into the sea and rivers, protecting marine ecology.

His work in the marine industry has extended beyond just sea-going bearings – Thordon has developed the RiverTough bearing material to withstand the abrasive conditions typically encountered in the US inland waterways. He has also revisited his early involvement in mechanical seals to develop a robust tailshaft seal design – the SeaThigor for blue water and the TG100 for abrasive water environments. Both seal designs feature a unique inflatable emergency seal that will allow the vessel to safely proceed, meaning the shaft can still turn with the seal in place if the seal face ever get damaged.

Thordon polymer materials have been used in numerous other maritime applications, including rudder bearings, deck machinery, dredger cutterhead bearings and floating production storage and offloading (FPSO) vessel turret and mooring equipment – all offering easy installation, long life and above all, because they require no oil or grease, any pollution risk is eliminated.

Sandy’s interests and involvement extend beyond the maritime world. Having gained his pilot’s licence at the age of 18, he could see opportunities for his polymer technology in the general aviation industry. He formed Marsh Brothers Aviation to provide aircraft solutions, among them the AeroTough GF, a self-lubricating polymer to replace greased nickel-bronze bushings and ThorFlex elastomeric polymer seals. Not only are these materials long-lasting and self-lubricating, they are cleaner and weigh significantly less than the alternatives. All were developed and tested on Sandy’s own Aerostar aircraft.

Sandy’s latest interest is in clean power generation. Thordon Bearings’ sister company, TG-DNALOP purchased a small hydro facility in Poland which is acting as a demonstration site for Thordon’s water-lubricated bearings and seals in a new generation of Kaplan turbines for the renewables industry.

Sandy sums up his philosophy: “To be the best demands a genuine commitment to innovation, problem solving, service and quality. Our goal is to provide products and services that represent the best possible value for our customers needs.”