Peter Solmssen to Resign from Siemens Managing Board

Peter Solmssen will resign from the Managing Board of Siemens AG by mutual agreement, effective December 31, 2013. A member of the Managing Board since October 2007, Solmssen has served as General Counsel and head of the Legal and Compliance Department. 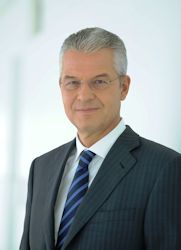 Gerhard Cromme, Chairman of the Supervisory Board of Siemens AG, thanked Peter Solmssen for his achievements. "Mr. Solmssen joined Siemens at a difficult time and played a key role in investigating the compliance affair at our company. By establishing a strong compliance organization, he performed a major service and made important contributions to steering Siemens through a challenging phase and restoring its good reputation."

Joe Kaeser, President and CEO of Siemens AG, expressed his gratitude to Peter Solmssen for his collegiality as a member of Siemens Managing Board. "Peter Solmssen played a central role in establishing a sustainable corporate culture of integrity which is viewed as exemplary worldwide," noted Kaeser. "This achievement will remain our benchmark and our beacon as we further align our legal and compliance organization. With Andreas Christian Hoffmann leading a highly professional team, we have the best prerequisites for undertaking this endeavor. I look forward to working with him and the Legal and Compliance team."

After studying law in Frankfurt am Main, Germany and Miami, Florida, Andreas Christian Hoffmann received his doctoral degree in Frankfurt in 1995. Following positions at various international law firms and companies, including BMW and General Electric, Hoffmann joined Siemens AG in 2008 as General Counsel for Industry Sector before moving to the company s headquarters as General Counsel Corporate and Finance in 2010.