“Throughout his 24-year career with Parker, Craig has effectively guided the company through a period of rapid innovation and technological advancement,” said Tom Williams, Chairman and Chief Executive Officer. “For decades, Craig has creatively applied his engineering expertise and passion for cutting-edge technologies to deliver new products and systems that create increased value for our customers. I would like to thank Craig for his transformational leadership and for the lasting impact his contributions have left on Parker and those around him.”

Mr. Maxwell joined Parker in 1996 as Manager of New Business Development for the Racor Division and was promoted to Division Engineering Manager in 1998. He became Business Unit Manager for the Fluid Control Division in 2002 and was elected as Chief Technology and Innovation Officer in 2003.

As Chief Technology and Innovation Officer, Mr. Maxwell had responsibility for global product development and driving Parker’s growth in new and emerging markets. He championed the creation of the Parker Technology Center designed to facilitate cross group collaboration and the development of additive manufacturing and robotics. In addition, he spearheaded the creation of the Motion Technology Center bringing Aerospace and Motion Systems together to leverage technologies for a more electric world. Mr. Maxwell was instrumental in the establishment of Parker’s annual Best Mousetrap competition and the company’s Winovation system, which applies a stage gate structure to the research and development of new products, systems and services. Recent major improvements to Winovation led by Maxwell have included new product blueprinting and Simple by Design™, which will significantly improve customer value and design excellence. As key goals of the Win Strategy, these initiatives will contribute significantly to enabling new product success and profitable growth at Parker for many years.

Commenting on Mr. Czaja’s election as Chief Technology and Innovation Officer, Mr. Williams added, “Throughout his impressive 35-year career with Parker, Mark has developed extensive engineering, commercial and leadership skills. He has both Aerospace and Industrial experience and is familiar with all eight of our motion and control technologies, which will provide a strong foundation as he assumes responsibility for advancing market driven innovation and growth across our global businesses.”

Mr. Czaja began his career with Parker as an engineering trainee and in 1985 became a Product Design Engineer with the Control Systems Division.  He was named Division Engineering Director in 2000. In 2004, he was promoted to Vice President of Technology and Innovation - Aerospace Group, where he had responsibility for engineering and product innovation across all Aerospace divisions and led the Group’s focus on lean product development across a number of key platforms including flight control, hydraulic and fuel systems. Mr. Czaja was named Vice President of Technology and Innovation - Motion Systems Group in 2019. He holds a Bachelor of Science degree in Mechanical Engineering from California State University and a Master of Business Administration from Pepperdine University. 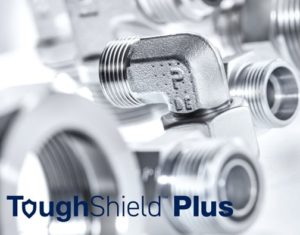 Parker Hannifin introduces the newly developed proprietary ToughShield Plus zinc-nickel surface treatment for all tube fittings and adapters worldwide. With this new development, Parker is bringing the zinc-nickel plating technology in the market to the next level.