Sales of valves to the oil and gas industry are expected to be $9.2 billion next year according to the latest McIlvaine forecasts in Industrial Valves: World Markets. 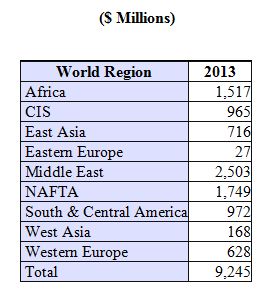 The Middle East will generate the most revenue, but NAFTA is closing the gap. Large numbers of valves are required in hydraulic fracturing. In the U.S., there is a very large investment in extraction of liquids from the so-called wet shale in the west and gas from dry shale areas in Texas and Pennsylvania.

The market is also expanding due to the expenditures to liquefy natural gas. In the U.S., terminals which were built to import and gasify LNG are now being converted over to liquefy the U.S. shale gas and export it.

New regulations on fugitive emissions also impact the valve market. Systems to capture gas now released during well completion incorporate a number of valves. The reclamation and reuse of wastewater is also an expanding application for valves.

The transport of gas liquids which are a byproduct of the shale gas extraction provide still another valve application. There are also plans to invest more than $20 billion in gas-to-liquid plants. These plants will take advantage of the disparity between natural gas and oil prices. These plants will each require thousands of valves.