Sollentuna Energi invests in development and expansion of capacity in their district heating network. This is done in order to meet rising demand from the property owners in the municipality. Emotron's new generation of variable speed drives are used for, among other things, controlling pumps in the network's booster stations. 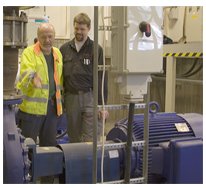 In Sollentuna, as in the rest of Sweden, greater consideration for the environment, plus rising electricity and oil prices, has led to more and more people wanting to connect their property to the district heating network. The development and expansion of capacity is now taking place at a tremendous rate in order to meet the rising demand. 318 properties signed up in 2005, and by the end of 2006 almost all the blocks of flats in the municipality and just over 2,600 single family houses had also been connected. In Sweden district heating now accounts for around half of all heating in homes and business premises.

The company Pumphuset is also based in Sollentuna, and for many years it has installed and maintained pump controls in the local heating, water and wastewater plants. Pumphuset works with all manner of pumps and offers installation, maintenance, servicing and advice. As an Emotron partner, Pumphuset can offer total solutions that include Emotron shaft power monitors, softstarters and variable speed drives.

The collaboration between Peter Johannisson, an installer for Pumphuset, and Franc Rostedt, an operations engineer at Sollentuna Energi, goes back about five years. "We're very satisfied with Pumphuset," says Franc Rostedt. "Their good service and high competence are very reassuring. Working with a local supplier is also a huge advantage if any problems come up they can be on site very quickly."

There are two booster stations in the Sollentuna district heating network. One of them is in the part of town known as Häggvik. When this station was rebuilt in connection with road works, Sollentuna Energi took the opportunity to upgrade the pump control system at the same time. They turned to Pumphuset, who chose the new Emotron FDU 2.0 variable speed drives. The drives were brought into commission in the spring of 2006 and acted as a pilot project ahead of the product launch that autumn.

The pump station has two Emotron FDU units, the first a 75 kW and the second a 90 kW. They control two pumps that are run alternately a week at a time. A third pump with a separate control system acts as a back-up pump. Operation is demand-driven and controlled on the basis of the difference in pressure between the water distributed to the subscribers and the water that returns. The difference is measured in substations along the network where sensors send signals to a pump computer. This in turn tells the variable speed drives the pumps' reference values and actual values.

"We're seeing lots of benefits with the new Emotron FDU drives," says Peter Johannisson. "Installation is simpler and cheaper thanks to the smaller size and higher enclosure class. We now have two wall-suspended IP54 units that cope well with the heat. During the spring and summer months the temperature can get up to 35-40 degrees Celsius in here. And that places huge demands on the equipment."

Another new feature that Peter Johannisson and Franc Rostedt can see being extremely useful is the I/O card that allows an Emotron FDU 2.0 to control up to seven pumps without a PLC or other external equipment. They are also going to make use of the built-in shaft power monitor to protect the pumps.

"Above all else, it comes down to the facility to avoid dry-running via alarms and blocking when there isn't enough water," says Peter Johannisson.

The Emotron FDU 2.0 also has several new features that make it even more user-friendly. Peter Johannisson and Franc Rostedt say that the most important thing is the option to select which process unit, e.g. flow, is shown on the control panel display. Another advantage is that the control panel is removable and has its own memory.

"This allows us to download the program we've created and copy or move it to the other Emotron FDU units. The facility to connect a PC cable directly beneath the control panel on the front also means that we don't need converters anymore." 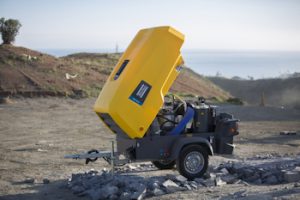 Throughout 2019, Atlas Copco will introduce several mobile electric Variable Speed Drive (VSD) air compressors to its E-Air range: from 250 up to 1100 cfm. These plug-and-play, electric-powered compressors are the ideal solution when working in a low emission zone.