New Pumps Save Millions At Sea

Grundfos-pumps and technology reduces the energy-consumption strikingly on the vessel Durban Bulker, which sails for Lauritzen Bulkers. 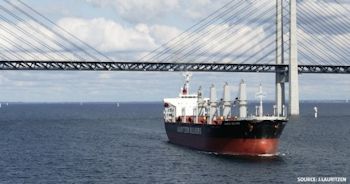 In the future, several ships can look forward to reducing their energy-consumption. This is part of the learning drawn from a pilot-project between the shipping line Lauritzen Bulkers and Grundfos. The project was carried out on the Durban Bulker, and had its focus on finding methods for saving fuel.

"There are a lot of pumps on ships. Often, they are oversized for their purpose and consume too much power. Among other things, this is because they are working to full effect all the time. We carried out an energy-audit on the Durban Bulker, and established that with the right system, a lot of energy could be saved", Kim Kirkegaard, Business Development Manager at Grundfos, says.

In the specific case with the Durban Bulker, the focus was on the energy-consumption for the cooling of the ship’s engines. Electricity used to power electronic applications as for instance pumps, and diesel used to power the generators that create the electricity.

The engines is cooled by pumping in sea-water, but no adjustments were made based on the shifting temperatures of the water, and in that, the possibility of saving energy when sailing in cooler waters had not been taken into account. In addition to that, the Grundfos-system reduces the power consumption, when the ship’s engines are going at a slower pace, and further increases the energy efficiency.

"We have been focusing on reducing our energy consumption for quite some time, but actually I was surprised, when I found out how significant the savings really are. With the Grundfos-solution, we can reduce our energy consumption dramatically. My estimate is that we on average can spend 30-50 percent less energy on the pumps on our ships", technical superintendent at Lauritzen Bulkers, Søren Roschmann, says, adding that the project has spurred on the shipping company, making them search for more savings on their fleet.

Not two are alike

Søren Roschmann explains that Lauritzen Bulkers already at this point are planning to install the system on a number of their other ships, and in connection to that, he finds joy in the fact that Grundfos is capable of working from case to case.

­"Ships are all different, and therefore it is important for us that Grundfos is capable of adjusting their solution to every ship", he says.

Grundfos too sees great potential in continuing the work on the market.

"It is definitely interesting to us. Roughly 60,000 ships are sailing the oceans, and there is room for energy improvements on most of them. On top of that we can add the approximately 2,000 new ships that are built every year. They do not need only one pump, they need a lot of pumps, which brings along a great potential for business as well as energy reducing", Kim Kirkegaard says.