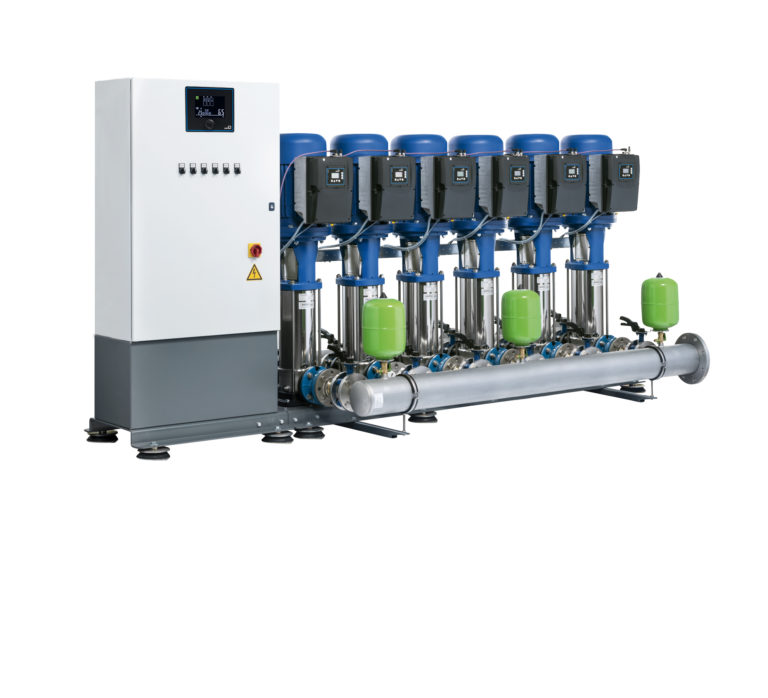 The systems’ microprocessor control unit (Booster Command Pro+) starts and stops the pumps in line with demand using either cascade control (F variant) or a frequency inverter for speed control (VC and SVP). LEDs on the control panel indicate the system's current operating status. A Modbus RTU interface provided as standard facilitates connection to external communication devices. For transmitting warnings or alerts to a higher-level control station, the standard configuration has two volt-free contacts on terminals in addition to other optional signal terminals.

The pressure booster systems can be connected to the KSB Delta FlowManager app using a Bluetooth LE interface. The app shows the current status of the pumps, the pressures on the suction and discharge side, and the programmed parameters. It also allows users to control and operate the system directly, and change the settings.

The SVP version is fitted with high-efficiency IE5 synchronous reluctance motors of the Supreme type series and the PumpDrive variable speed system. The F and VC variants are equipped with IE3 motors. The first pump is started by a pressure drop in the piping when a consumer installation is opened. While the pressure booster system is in operation, the microprocessor control unit starts and stops the pumps in line with demand.

When water consumption stops, all pumps are ramped down one after the other once the stop pressure has been reached. This ensures that the individual pumps operate only in line with actual demand. If a pump has not been operated for over 24 hours, the microprocessor control unit initiates a test run for this pump. Should lack of water occur in the inlet, the system stops automatically to prevent damage caused by dry running.

The manufacturer assembles and tests all systems at the factory prior to sending them out, so all operators have their units delivered ready-to-connect. This makes commissioning easy and fast for the service personnel. Thanks to shut-off valves downstream and upstream of each pump, replacing a pump does not require the piping to be drained beforehand.

All parts in contact with the fluid handled are made of stainless steel or brass. The sealing elements are made of EPDM that has been approved for drinking water, ensuring corrosion resistance and a long service life. The systems and any add-on parts that come into contact with the fluid handled have been approved for drinking water in accordance with the German Environment Agency (UBA), the German Technical and Scientific Association for Gas and Water (DVGW), the French Certificate of Sanitary Compliance (ACS) and the British Water Regulations Approval Scheme (WRAS). All installed globe and check valves have also been granted drinking water approval by the DVGW.

KSB and Leistritz Pumpen GmbH are embarking on a joint service future with the aim of becoming even more efficient and networked, providing an extended range of screw pump services.

KSB Gets Off to a Strong Start in the New Year 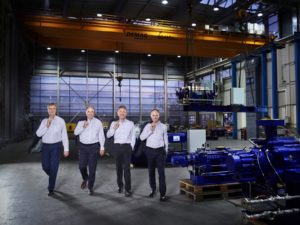 In the year of its 150th anniversary, Frankenthal-based pump and valve manufacturer KSB achieved its best financial year in a long time. Despite coronavirus-related site closures in some countries, all key indicators were within the forecast, which was adjusted upwards in the fourth quarter.