The new BOA-Control and BOA-Control IMS valve series of KSB unite three functions in a single valve: shut-off, balancing and measuring. The valves are mainly used for hydraulic balancing in hot-water heating systems, air-conditioning systems and cooling circuits as well as in other applications for flow rate and temperature measurement. 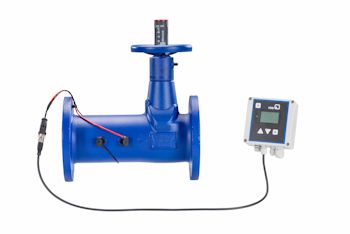 This design saves the costs of purchasing and installing additional valves. It also reduces the installation space required.

The valve series uses ultrasound waves to record the flow rate via transit time difference measurement. In addition, an integrated temperature sensor precisely records the fluid temperature. The data gathered can either be saved on site using a mobile measuring computer or transferred continuously to a control station via a stationary measuring computer.

Two sensors attached to the BOA valve enable ultrasonic sensor measurement. Unlike the differential pressure measurement common for hydraulic balancing, the valve and the measuring computer are connected by electric cables rather than by two pressure measurement hoses. This prevents leakages and reduces the risk of operating personnel getting injured when working with hot water. Also, irrespective of the valve travel positions and the minimum differential pressures, the flow rate can be determined while the handwheel is being moved.

Depending on the application, the sensors can be attached in two different ways:

The BOA-Control balancing valve is designed for accommodating the sensors for ultrasound measurement. Rather than being permanently installed, they can be attached to the valve body via a magnetic connector. Together with the mobile Boatronic-MS computer, measurements can be performed on any number of valves of this design.

An alternative is the type series BOA-Control IMS. Here, the sensors are permanently connected to the BOA valve. The Boatronic MS-420 measuring computer continuously transmits the flow rate and temperature values via a 4 - 20 mA signal to a higher-level system. In this design, each valve has its own computer mounted to the valve. Combined with an intelligent electric actuator the valve can also be used as a fully automatic control and measurement valve.

Since the previous generation the developers have further increased the measurement accuracy and extended the permissible measuring range. Further additional functions such as error messages, measurement data protocols and direction of flow indicators raise the system s reliability.