National Oilwell Varco reported a third quarter 2016 net loss of $1.36 billion, or $3.62 per share. Excluding other items, net loss for the quarter was $128 million, or $0.34 per share. Other items totaled $1.09 billion, pretax, consisting of a $972 million goodwill impairment and $116 million of other charges primarily associated with severance, facility closures and write-offs of certain assets.

“Our ability to post a higher Adjusted EBITDA on a five percent sequential decline in revenue was the result of our team’s continued progress in improving our efficiencies and lowering our costs,” commented Clay Williams, Chairman, President and CEO. “While consolidated revenues continued to contract in the third quarter, two of our four reporting segments posted sequential revenue growth, and three of our four segments posted higher margins.”

“We are encouraged by the early signs of a recovery in the North American marketplace. Our short cycle businesses within our Wellbore Technologies Segment account for over 80% of total segment revenue. Within North America these posted sequential revenue growth of approximately 15%. Even though international, offshore and capital equipment markets remain challenging, we believe declining global production and improving commodity prices are setting the stage for a broader recovery in 2017. In the meantime, we continue to aggressively reduce costs, improve efficiencies, and invest in our comprehensive technology portfolio. So far in 2016 we have added significant new technologies in completion tools, directional drilling tools, condition-based monitoring services and drilling optimization services. All are winning significant customer interest, and all better position NOV for the inevitable recovery.”

Backlog for capital equipment orders for Rig Systems at September 30, 2016 was $2.76 billion. New orders during the quarter were $185 million, representing a book-to-bill of 51 percent when compared to the $363 million shipped out of backlog.

Wellbore Technologies generated revenues of $526 million, an increase of three percent from the second quarter of 2016 and a decrease of 37 percent from the third quarter of 2015. The segment reported an operating loss of $94 million, or 17.9 percent of sales. Adjusted EBITDA was $26 million, or 4.9 percent of sales, an increase of $25 million sequentially and a decrease of $100 million from the prior year.

Backlog for capital equipment orders for Completion and Production Solutions at September 30, 2016 was $812 million, down 14 percent from the second quarter of 2016, and down 31 percent from the end of the third quarter of 2015. Revenues out of backlog during the quarter were $319 million. New orders were $184 million, achieving a book-to-bill of 58 percent.

NOV entered into an agreement with Akastor ASA (OSE: AKA) to acquire Fjords Processing (“Fjords”), a global leader in the provision of processing technology, systems and services to the upstream oil and gas industry. The acquisition provides technology that is complementary to NOV’s Process and Flow Technology Business Unit, which provides production and process solutions. The combined operations will be able to leverage the collective organizations’ global infrastructure and channels to market.

NOV Rig Systems received two new land rig orders during the third quarter, including an order for a state-of-the-art Extended Reach Drilling (ERD) rig for Alaska’s North Slope. This highly-specialized rig will be able to drill to 33,000-plus feet, or 6.25 miles, as compared to the approximate 22,000-foot, or 4.17 mile, reach of current rigs utilized by the production company.

NOV was awarded a study for its HoneyBee FPSO, as the Company continues to advance its FPSO strategy and garner interest from operators. The HoneyBee design is a smaller, more flexible design that enables economic production and testing from initial wells in a field and economic full development of marginal fields.

NOV was awarded new contracts in the North Sea and Asia Pacific for its Hot Oil Thermal Desorption Units (HTDU), which enables the safe and efficient treatment of oil-based mud drill cuttings. NOV’s HTDU technology cleans cuttings to meet zero discharge requirements, and recovers oil for reuse in drilling fluid. NOV is the worldwide leader in the design, manufacture, operation and use of this environmentally-friendly technology that allows customers to operate in increasingly stringent regulatory environments.

NOV designed and manufactured a record-setting string of 2-5/8-inch coiled tubing measuring 25,595 feet and 149,748 pounds for a service company in the Permian basin. This record-setting string enabled the customer to mill out composite bridge plugs and perform logging runs in a well with a 12,500-foot lateral, far beyond the typical maximum lateral lengths for coiled tubing mill outs in West Texas. Every step of the process, including string design, planning, milling and shipping, and spooling and installation, was executed by NOV’s trained engineers and technicians in less than 10 days.

NOV recently launched its BlackStar™ II dual-telemetry MWD system which combines the capabilities of electromagnetic (EM) and mud-pulse data transmission in one tool, allowing customers to switch transmission modes while the tool is downhole to avoid costly trips to change out equipment and maximize uptime. On customer trials in West Texas, the tool was used from the kickoff point at 7,800 feet to a total depth of 15,878 feet, maintaining the EM signal the whole time due to the tool’s enhanced power capabilities that expand the possible utilization of EM telemetry.

EBARA CORPORATION is pleased to announce that they have invested (total investment of 1.0 billion yen) in and signed a basic business alliance contract with Spiber Inc.

SEEPEX is pleased to announce Ellyn Chaney has joined the team as the HR Manager; the promotions of Joey Cherry to Director of Operations, Jeannie Raymond to General Manager for Stator Production, and John Salyers to Regional Sales Manager; and the retirement of Mike Dillon, former President. 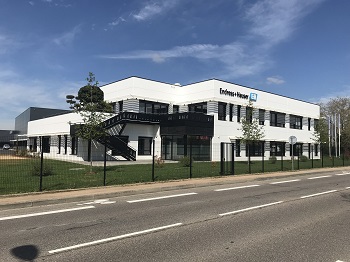 Endress+Hauser has expanded its center of competence for advanced analysis in Lyon, France. The Group invested 2 million euros in a new production facility and office space to meet the growing demand in the area of advanced process analyses.

Circor announces the launch of Emtec-C, the next generation of the Allweiler three-screw pump that moves abrasive machine chips, particles and heat away from cutting surfaces in high-pressure machine tool coolant service, delivering improved durability and best-in-class efficiency.

Atlas Copco, a leading provider of sustainable productivity solutions, has agreed to acquire the assets of Renegade Drilling Supplies Proprietary Ltd., a South African manufacturer and distributor of drilling consumables for mining exploration.