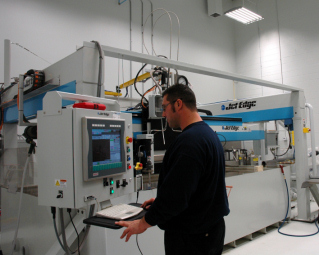 “We’ve been seeing, across the board, a 35% improvement in cutting speed, plus we are using about 25% less garnet abrasive, and we have reduced our costs by 30%,” said Nick Hughes, MWR’s technical director. “As an example, our spindles, which are one of our more complicated steering parts and cut from 2" 4140 steel, used to take 50-55 minutes to cut at 60,000 psi. Now we are cutting them in 30-44 minutes. Before we got the waterjet, it used to take three or four hours to rough cut them on a bandsaw. I also should note that about the same time we upgraded our pump, we changed suppliers for our spindle blanks. They use a much harder material that requires a slower cutting time. The X-Stream offset the increased cutting time.

Thanks to these increased cutting speeds, MWR has been able to reduce its waterjet operating hours from 60 to 65 hours per week to 40 to 50 hours per week, saving on labor and overhead, Hughes noted.

“From a throughput standpoint, we’re able to push a lot more product through in the same period of time,” he said. “This has freed up machine time so we can cut jigs and fixturing in addition to racecar parts. We’re able to rough these out on the waterjet much faster than with conventional cutting tools.”

“The X-stream has opened the door for more commercial opportunities,” he said. “It helps bring the cost down and we’re able to pass that down to the other teams. They are able to get a quality product at a lower price plus they can leverage off of MWR’s engineering and manufacturing capabilities.”

According to Hughes, MWR waterjets 250 parts for each of its racecars. The parts are cut from a wide variety of materials ranging from ¼” Nomex to ½” steel, and include numerous panels, mounts and chassis components, plus duct work, windows, splitter panels and much more. MWR builds about 56 cars per year, which include the #55 NAPA AUTO PARTS Toyota Camry driven by Michael Waltrip and fielded by MWR, the #00 Aaron s Dream Machine Toyota Camry driven by David Reutimann and fielded by MWR, the #47 Little Debbie Toyota Camry driven by Marcos Ambrose fielded by JTG- Daugherty Racing through a technical alliance with MWR, and the NASCAR Nationwide Series #99 Aaron’s Dream Machine.

“We would absolutely, definitely recommend the X-Stream pump to others. The productivity improvements and cost savings are very measurable. Jet Edge’s service has been fantastic and any components we’ve needed to get in have always been in stock. We have nothing to complain about.”

Established in 1984, Jet Edge is a global designer and manufacturer of waterjet systems for precision cutting, surface preparation and coating removal. Jet Edge systems are used around the world in a broad range of industries, from the world s leading airlines to automotive, aerospace, industrial manufacturers, machine and job shops.