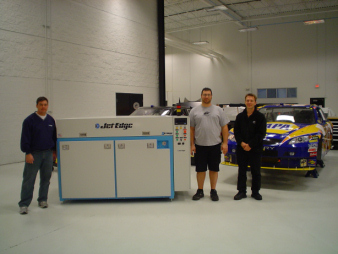 MWR plans to achieve much faster cutting speeds and drastically lower its operating costs with its new Jet Edge X-Stream pump. The pump produces 50% more pressure than a typical 60,000 psi waterjet intensifier pump, resulting in a 40-50% increase in productivity for many materials. As a result of these faster cutting speeds, MWR can expect to use 30% less water, 30% less power, and up to 50% less abrasive.

“These days we’re all looking for ways to save time and money, and Jet Edge’s X-Stream pump does both,” said Nick Hughes, MWR’s technical director. “We couldn’t ask for anything more.”

“After we installed our Jet Edge last year, we increased our productivity by 50 percent and were able to get technology improvements to the racetrack two weeks faster than in the past,” he said. “This resulted in some very respectable finishes that got everybody talking about Michael Waltrip Racing. It really comes down to machining time. We can cut parts a lot faster on the waterjet than on the milling center. We are also producing better quality parts and we are seeing huge reductions in material waste thanks to the Jet Edge’s tight nesting capabilities.”

Hughes noted that the Jet Edge waterjet was instrumental in the development of MWR’s newest racecar, the Series 600.

“The Jet Edge waterjet was key to the redesign,” Hughes said. “It enabled us to design and produce parts at a moment’s notice. We were able to get the project done much faster and much more cost effectively than we could have in the past. As we enter our third year of Sprint Cup Series competition, there is no doubt that we will be placing even more demands on our Jet Edge waterjet. The X-Stream pump’s faster cutting speeds will help us keep up with that demand.”