Municipal Wastewater Plants Will Spend $4.5 Billion For Valves In 2017

Municipal wastewater plants will spend $4.5 billion for valves in 2017. $3.4 billion will be for on/off valves, and the balance for control valves. This is the conclusion reached in Industrial Valves: World Markets published by the McIlvaine Company. 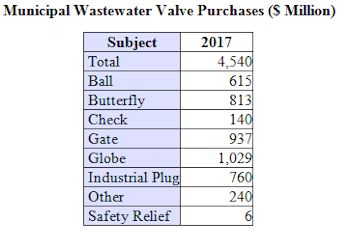 By contrast, other countries in the Americas treat anywhere from 31 percent to 79 percent of the transported sewage. So there is a big potential for valves for new plants in these regions. There is new construction in smaller cities in Eastern Europe. The EU Urban Wastewater Treatment Directive is the guiding force behind the new construction and upgrades. Romania has until 2015 to comply, whereas, Croatia is facing a 2023 deadline.

The plant size is smaller in Europe than in the U.S. For example France has less than 20 percent of the population of the U.S., however, it has 19,000 municipal wastewater plants compared to 16,000 in the U.S.

There are 1,900 active projects in the U.S. and Canada which will require significant valve purchases. However, many of the projects are to replace or upgrade existing facilities rather than for additional needed capacity. The U.S. has not modernized and renovated faculties on an acceptable twenty year cycle. Many valves are obsolete in design and should be replaced by the "intelligent valves" offered today.