More orders for KSB in Europe and Asia

KSB Group reports as per 30 September 2002: In the Region Asia / Pacific an economic upturn was been registered while the other markets showed at best just moderate dynamic growth. 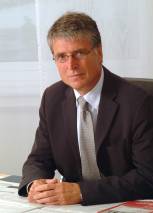 Josef Gerstner, Chairman of the Board of Management of KSB Aktiengesellschaft since 1996 (source: KSB)

The hopes for an economic upturn during the first nine months were fulfilled only in the Region Asia / Pacific. The other markets for pumps and valves showed at best just moderate dynamic growth. Above all in the stagnating market of Western Europe, growths could only be achieved at the expense of competitor companies.

Against this economic background, the KSB Group managed to increase its order volume up to end of September by 3.3 percent compared with the same period last year. The growth drivers were our companies in Europe and Asia. KSB AG in Germany improved its order intake by 3.5 percent.

In Europe, good growth in the third quarter was reported above all in the Industry and Building Services sectors as well as in Service. In Asia, the positive development in orders was due amongst other things to three major orders for equipping power plants in China. A reversal of order growth was reported by the Region Americas as a result of the poor US economy and the problems of some Latin American states. The situation was not helped by changes in the currency exchange ratio due to a strengthening of the euro. The two consolidated KSB companies in the Region Eastern Europe / Middle East / Africa showed a slight increase in orders.

In terms of sales, too, the KSB Group in the first nine months of 2002 was up 3.2 percent on the same period last year. KSB AG achieved a sales growth of 4.9 percent, while growth in the German Service companies and KSB Fluid Systems GmbH was higher still. Most other European companies also reported sales growth. The companies in the Region Asia / Pacific achieved the same level as last year, with good sales improvement in China and Pakistan.

Sales in the Regions Americas and Eastern Europe / Middle East / Africa were down on the previous year's figures for the first nine months. The sales of the US subsidiary KSB Inc. showed a very good development with power station pumps. But this trend will not be continued in the fourth quarter owing to a decline in demand in the energy sector.

The Group's pre-tax result, which in mid-2002 was still below that of the previous year, increased in the third quarter to plus € 15.7 million. A substantial improvement in the result compared with the same period last year was achieved above all by KSB AG. Positive contributions to the Group results came from all Regions.

Change in the number of employees

The number of employees on 30 September 2002 was 1.8 percent lower than at the same time last year. This is essentially due to personnel adjustments in some American companies. In Europe, the number of employees at KSB S.A.S. in France fell as a result of the sale of building services production in Châteauroux at the beginning of the year.

It remains the assumption for the KSB Group that order intake and sales at the end of 2002 will be at the same level as last year. Results will improve over the previous year as a consequence of the cost reduction programmes that have been carried out.

In view of the current economic forecast for the coming year, the market situation can be expected to remain difficult. It will call for a redoubling of efforts to improve our market position in an environment of predatory competition and to carve out new sales opportunities for our products.