Despite wide-spread concern about the global economy, manufacturers appear to be very optimistic about the economic outlook for the HVACR industry.

According to a recent survey of more than 1,000 AHR Expo exhibitors worldwide, nearly three fourths (72%) of the total respondents expect a ‘better year’ (59%) or a ‘much better year’ (13%) in 2012 compared to 2011. Twenty four percent replied that sales would be the ‘same’, while only four percent are expecting a ‘worse year’. 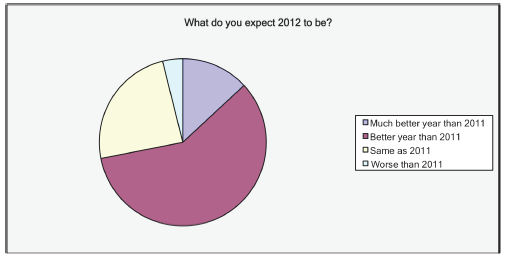 Some survey respondents expect significant sales increases in 2012. Ethan Hoberman, Sales Manager at Pridiom, said that following an anticipated 40 percent growth in 2011, they are “expecting to double sales in 2012”.

This overall optimistic 2012 outlook may be due in part to the fact that 76 percent of the respondents believe there is ‘pent-up industry demand’ for new products. This compares to the 61 percent that felt there was pent-up demand in 2011, which is an indication that their customers are getting ready to buy more new equipment.

“After several years of slow growth and sales, replacement/new equipment should start to grow as equipment becomes too old/obsolete/worn-out to be repaired,” Hoberman said.

Another encouraging survey finding is that 72 percent of the exhibitors plan on introducing new products at the 2012 AHR Expo in Chicago, January 23 – 25. This is up sharply from the 62 percent of companies that said they were introducing new products at the 2011 event. This also indicates that many exhibitors expect their customers to come ready to buy.

“We anticipate 2012 will be a much better year, based on the industry leading products we have launched in the last two years and what we will be launching in 2012,” added Don Winter, Vice President of Marketing, McQuay International.

Other major findings of the survey were:

“These survey results and the fact that this will be the largest AHR Expo in the Show’s 82 year history bodes well for the HVACR industry outlook”, said Clay Stevens, President of International Exposition Company, which produces and manages the AHR Expo. “Manufacturers know that their customers will finally need to replace their worn-out equipment with more energy-efficient technology so they have reserved exhibit space in record numbers to meet this demand.”

The 2012 AHR Expo will feature more than 1,900 exhibitors from around the world showcasing hundreds and hundreds of innovative new products to over 50,000 attendees and exhibitor personnel. The 2012 AHR Expo is endorsed by 31 leading HVAC/R industry associations and is co-sponsored by the American Society of Heating, Refrigerating and Air-Conditioning Engineers (ASHRAE) and the Air-Conditioning, Heating and Refrigeration Institute (AHRI). The Heating, Refrigeration and Air-Conditioning Institute of Canada (HRAI) is an honorary sponsor. ASHRAE s Winter Conference is held concurrently with the AHR Expo each year.