Despite the economic slowdown that began in 2007, the pump industry over the past decade has experienced relatively stable activity in mergers and acquisitions and surprisingly high prices for those transactions. This article, an excerpt from William Blair & Company’s spring 2010 Pump Industry Insights report, looks at the factors driving the industry’s strong M&A activity and assesses the landscape for future deals. 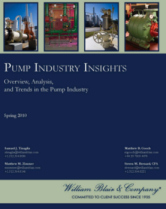 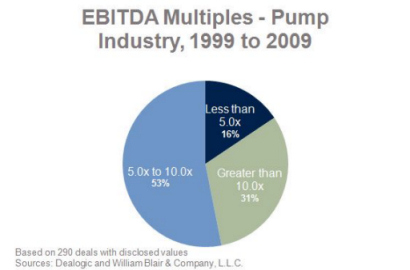 In nearly one-third of the pump M&A transactions completed from 1999 to 2009, the acquired company sold for more than 10 times its EBITDA of the preceding 12 months. Nearly 85% of the deals brought prices greater than 5 times EBITDA.

These are surprisingly high multiples for what is typically seen as a moderate-growth industrial space. The strong valuations are due largely to the fact that many of the transactions are highly strategic for acquirers, which generates strong demand. More than 85% of the acquisitions were by strategic buyers, rather than private-equity funds or other financial buyers. Unlike private-equity funds, which turn over their portfolio companies every three to seven years on average, strategic purchasers typically hold on to their acquisitions. As a result, the available pool of attractive targets will continue to shrink, helping maintain above-average valuation multiples.

As is the case in other industries, larger transactions in the pump space generally garner higher valuations. From 1999 to 2009, transactions greater than $500 million were completed at a median EBITDA multiple of 9.4 times, more than 30% higher than multiples for deals valued at less than $50 million.

M&A activity in the pump industry has remained relatively stable over the past decade, despite the boom-bust cycles that defined the economic landscape of the past 10 years. Four primary factors drove this stability:

The highly fragmented nature of the industry and the desire for strategic acquirers to grow (into new geographies, end-markets, and technologies) will continue to drive stable long-term M&A volumes. The growth in Asia’s participation, as both an acquirer and a target, will also help accelerate M&A activity as the global economy rebounds.

William Blair & Company’s Pump Industry Insights provides quarterly updates on M&A activity and other trends affecting the pump industry. If you are interested in receiving this full report, as well as ongoing quarterly market updates, please contact Sam Tinaglia at stinaglia@williamblair.com (+1.312.364.8086) or Matt Zimmer at mzimmer@williamblair.com (+1.312.364.8146).