"In a healthy state" is how Chairman of the Board Josef Gerstner sees the KSB Group. On 29 April, at the financial press conference of the pumps and valves manufacturer, he again presented improved performance figures. 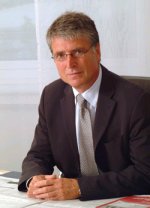 Josef Gerstner, Chairman of the Board (Copyright: KSB Aktiengesellschaft)

These figures show that the Group - reporting for the first time in accordance with IFRS (IAS) - increased its earnings before income tax in 2002 from € 26.9 to 34.3 million; the return on sales amounted to 2.9 percent.

The Group's consolidated equity ratio further improved from 40.4 to 41.4 percent. At the same time, the return on equity rose from 7.4 to 9.5 percent. KSB improved the net financial position of the Group from € 25.6 to 66.4 million.

While the market for pumps and valves in 2002 virtually stagnated throughout the world, the KSB Group in-creased its order intake by 1.5 percent to € 1199.9 million; Group sales revenue rose by 1.6 percent to € 1180.2 million.

In the current year, too, KSB aims to increase order intake and sales further, despite difficult economic conditions. In the first quarter, the Group achieved an order intake up by 5.4 percent on the same period last year; sales increased by 3.5 percent. KSB achieved growth in all regions except the Americas, where the change in currency exchange rates to the euro put a damper on corporate figures.

However, warning against overoptimistic expectations, Josef Gerstner pointed out at the press conference that it cannot be assumed that the overall positive trend in order intake would continue. In view of the general economic situation, he said, it was to be expected that some months of weaker order intake would follow.

For the future, KSB is aiming to push ahead quickly with its development from a manufacturer of pumps and valves to a supplier of modules and systems for transporting liquids. To this end, the company is seeking to create more and more integrated solutions with its products and services.

Flowserve Corporation, a provider of flow control products and services for the global infrastructure markets, announced its financial results for the third quarter ended September 30, 2020.