At its headquarters in St. Georgen, Austria, the Voith subsidiary celebrated its 90th anniversary on 17 and 18 May 2018. On both days of the event, Kössler presented its latest innovative solutions and highlighted the prospects offered by energy generation from small hydro to numerous guests 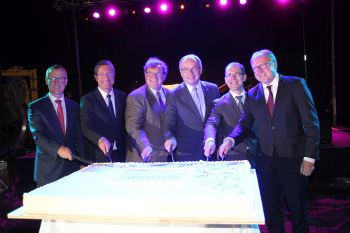 Innovation and expansion under Erich Kössler

Erich Kössler, Managing Director from 1970 to 1985 and the son of the company s founder Alois Kössler, played a decisive role in getting the company into the position it is in today. Under his leadership, Kössler began to tap into markets outside the German-speaking regions of Germany, Austria and Switzerland. As a result, the company s export quota rose to more than 80 percent in the late 1980s. The company experienced a further upturn following the commitment of European nations to the climate protection targets agreed in Kyoto in 1997. Kössler benefitted from the fact that numerous governments were focusing on renewable energies for electricity generation. The growing demand gave the small hydro specialist the opportunity to develop new technologies. For example, the use of tubular Kaplan turbines with internal generators in the small hydro segment is a Kössler innovation. The StreamDiver, which Kössler developed in conjunction with its parent company Voith, is also one of the innovations to come out of St. Georgen.

By means of a presentation of outstanding projects from previous years on both days of the event Kössler demonstrated why the company is nowadays a front runner with its solutions in the small hydro segment. The presentation included the 14 small hydropower plants with a total capacity of 18.5 MW which the company built in Scotland in recent years for its customer Green Highland Renewables. Another highlight is the three small hydropower plants Qorlortorsuaq, Sisimitu and Ilulissat in Greenland. Operated as stand-alone facilities, these facilities replace the diesel units previously installed. Kössler technology is helping to reduce CO2 emissions in Greenland s fragile environment. In the Melk run-of-river power plant in the immediate vicinity of St. Georgen the invited guests were able to admire the latest state-of-the-art in the small hydro segment.

The speeches were rounded off by presentations on the perspectives for energy generation from hydropower, the importance of small hydro in the coming years and on new technological developments by Kössler. Kössler was able to attract Dr. Otto Pirker, Chair of the Hydropower Working Group at Eurelectric, the Union of the Electricity Industry in Europe in Brussels, as keynote speaker. It is his view that hydropower will continue to play a dominant role among renewable energy sources in the future. “Compared with wind and solar, hydropower has an immeasurably greater availability and can provide all kinds of grid services and flexibility products. This makes it the ideal partner for wind and solar in the energy system,” says Pirker.

Kössler has been part of the Voith Group since 2007, a partnership that benefits both companies. “Above all in the field of technological development new synergies are always emerging,” says Robert Schuhmayer, CEO of Kössler since April 2018, adding: “Only a few of our competitors can draw on this very high level of technology.” Schuhmayer, who spent many years at Voith in the role of CFO, aims to further expand the role of Kössler in future as a technological center of excellence for small hydro within the Voith Group. The conditions for doing so are extremely good given that Kössler gathers under one roof all core areas of expertise, from turbine and model development to design, fabrication and after-market service, and complements this with 90 years of know-how.