For more than 80 years, Voith has been building and modernizing hydropower plants in Central Asia and the region around the Caspian Sea. To date the technology group has realized more than 150 projects, with many more at the planning stage or about to be implemented. Overall, Voith hydropower technology provides more than 95 million people in the region with a reliable electricity supply. 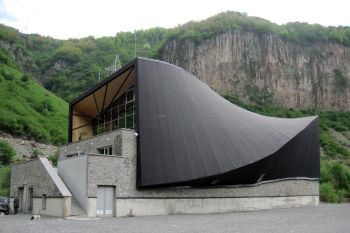 The upper stage Aragvi II is currently being built for the small hydropower plant Aragvi I in Georgia.

Voith is underpinning its commitment to the development of electricity generation from environmentally friendly hydropower by supporting the international congress “Hydropower Caspian and Central Asia” in Georgia. The company will be a gold sponsor of the event for the first time this year. The congress will be held on 14 and 15 February 2018 in the Georgian capital Tbilisi. Together with its subsidiary Kössler, Voith will showcase its entire range of products and services for large and small hydropower plants.

In Georgia, the host country for the congress, Voith has an installed capacity of 2206 MW in 13 facilities, making it one of the leading industrial partners for the design, construction, maintenance and upgrading of hydropower plants. Currently, Voith subsidiary Kössler is equipping the Mestiachala 1 & 2 power plants in the Mestia mountain region for an output of more than 50 MW and is fitting electrical and mechanical components to the small Aragvi II power plant in the north-east of the country. Following its commissioning in summer 2018, the 2.1 MW Aragvi II power plant will help supply power to the burgeoning ski and tourism region of Gudauri. The Mtkvari power plant, for which Voith is supplying the entire electrical and mechanical systems, is currently being built in the south-west of Georgia. The scope of supply also includes two vertical Francis turbines each with an output of 27 MW. The Mtkvari power plant is set to go into operation in 2019.

Another prestigious project in the region is the upgrade to the Russian hydropower plant Saratov. Among other things, Voith will be replacing the 21 vertical Kaplan turbines in this plant with more efficient models. This facility has been operating for more than 40 years. With a diameter of 10.3 m each, and a runner weight of 314 metric tons, the turbines are the largest of their kind in Russia. The first part of the upgrade was successfully completed in 2015. The other machine sets will be commissioned at the rate of two units a year, with the project scheduled for completion by 2025. Following the rebuild, the output of each turbine will increase from 60 to 68 MW. The power plant, which is located around 160 km north of Saratov, is part of the Volga-Kama cascade of dams and an important cornerstone for the reliable supply of power to the Saratov region.