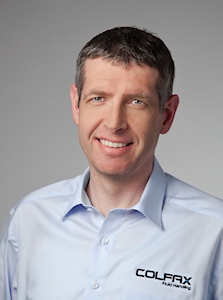 Since March, Gunter Connert has been in charge of Direct Sales to Power & Industry in the EMEA region for Colfax Fluid Handling, a business segment of Colfax Corporation (Image: Allweiler GmbH)

As Direct Sales Manager at Colfax Fluid Handling, Gunter Connert is responsible for serving the Power & Industry business segment in Germany, Benelux, Great Britain, and Finland. In each of these countries and regions, Colfax utilizes a dense network of regional distributors and sales partners.

After completing his university studies in Business Management at the University of Karlsruhe, Mr. Connert began his professional career at Voith Turbo. Later he worked for plant builder Eisenmann in the United States and Germany. Before joining Colfax Fluid Handling, he was Managing Director of MAG Switzerland AG in Schaffhausen, Switzerland.