Grundfos Taiwan has been named by the Taiwan Machine Tool Manufacturers Alliance, or M-Team, as ‘Top Best Supplier’ for the third year running, the highest accolade recognising exceptional performance and industrial excellence amongst its members from the machine tools industry. 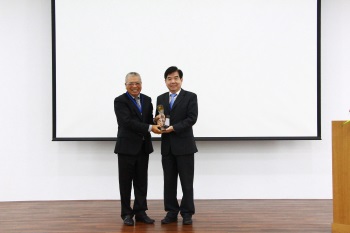 Grundfos Taiwan first joined the M-Team as a supplier in 2012. After winning the ‘Best Supplier’ award for three consecutive years in 2014, 2015, and 2016, Grundfos Taiwan was conferred the title of ‘Top Best Supplier’ first in 2016, and then subsequently again in 2017, and recently 2018. The award ceremony was held in conjunction with M-Team’s annual general meeting.

Grundfos Taiwan’s Plant Director Mr. John Pien said, “We are honoured to be recognised once again, by an industry alliance, as a leader in supplying pumping solutions to the machine tool market. This award is testament to our commitment in leading industry innovation by focusing on local infrastructure and technology development.”

“We are proud that our solutions continue to rank among the top in the world, not only in terms of quality, but also in terms of serving the needs of the industries and people in the markets we operate in.” Mr. Pien added.

In selecting this year’s winners, M-Team auditors visited all of its suppliers and evaluated their performance based on criteria around lean operation, business, technology, and service. For 2018, Grundfos Taiwan was the only multinational supplier to receive the “Top Best Supplier’ title.

M-Team Chairman and Chairman of the Quaser Machine Tools Inc. Mr. Jui-Mu Hsieh, said, “Grundfos Taiwan has demonstrated excellence across all aspects, and has once again set the benchmark for other suppliers within the M-Team family. We are confident that Grundfos Taiwan’s knowledge and expertise will continue to propel the local machine tool industry to greater heights.”