Not many Colombians have heard about a pump manufacturer with headquater in Denmark. This is a fact, which will be changed, after Grundfos April 9 inaugurated a company in the capital Bogota. 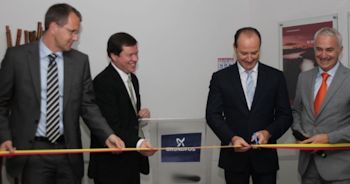 With the new company Grundfos wants to be a part of the positive development in the South American country, which among other things benefits from an increasing utilization of its big oil resources.

Deputy General Manager, Grundfos Colombia, Carlos Añasco, desicribed in his speach the inauguration as a very important moment in the history of Grundfos. "Colombia is one of the most important countries in South America and with the intention to expand more", he said.

Closer to the customer

Group Executive Vice President Lars Aagaard referred to the establishment in Colombia as an ambitious project for a company with big ambitions.

Regional Managing Director Carlo Prola said in his speach, that he has confidence in people’s belief in the future and emphasized it with this statement about his own belief in Grundfos’ future development in Colombia: "We want to be the number one."