At the Supervisory Board meeting, two long-serving GEA managers, the German Steffen Bersch, and the Dane Niels Erik Olsen were appointed to the Executive Board with effect from January 1, 2016. , 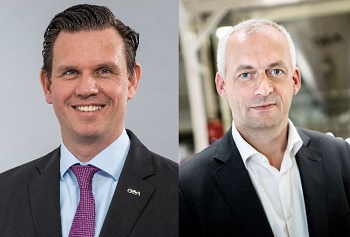 Alongside the CEO, Jürg Oleas, the Chief Financial Officer, Dr. Helmut Schmale, and the Member of the Executive Board in charge of Human Resources & Legal Affairs, Dr. Stephan Petri, Steffen Bersch will be in charge of the new Equipment Business Area established within the framework of the Fit for 2020 project, while Niels Erik Olsen will assume responsibility for the Solutions Business Area. Markus Hüllmann will leave GEA with effect from December 31, 2015 as he has decided to start his own business. Thus, GEA will be managed by a team of five Executive Board members in the future.

"The Supervisory Board of GEA Group Aktiengesellschaft would like to thank Markus Hüllmann for his extremely successful commitment to the company during the past years and wishes him all the best for the future. At the same time we are pleased to see the internationally experienced managers Steffen Bersch and Niels Erik Olsen complementing the Executive Board", says Dr. Jürgen Heraeus, Chairman of the Supervisory Board of GEA Group Aktiengesellschaft.

Steffen Bersch (46) joined GEA fifteen years ago and currently holds the position of Executive Vice President Business Area Equipment. Starting his career as head of marketing and in product management, Bersch became Managing Director of GEA Middle East in Dubai in 2007 before moving to GEA s separator division in 2010, first as Vice President Service International, then as President Mechanical Separation. Steffen Bersch is graduated in food technology and has a master s degree in biotechnology.

Niels Erik Olsen (49), Executive Vice President Business Area Solutions, has a master s degree in mechanical engineering and joined the company as a project engineer in 1991. He transferred to GEA Singapore in 1995 to take up the role as Regional Sales Manager South East Asia. In 1998 Niels Erik Olsen took over as General Manager at GEA Technology Equipment in China. At the end of 1999 he assumed the position of Division Manager at GEA North America. After returning to Denmark in 2002, and heading up the Chemical business, he was promoted to Executive Vice President GEA Process Engineering in 2007 and appointed to the Board of the Process Engineering Segment in 2010.

"Much to my regret, Markus Hüllmann has decided to seek a new professional challenge and not renew his service agreement with GEA. By appointing Steffen Bersch and Niels Erik Olsen to the Executive Board, we are emphasizing our commitment to continuity while reinforcing operational responsibilities in line with GEA s new structure", remarked Jürg Oleas.

The 2020 Yokogawa Users Conference and Exhibition has been scheduled for August 31 – September 3, 2020 at the Woodlands Waterway Marriott Hotel & Convention Center in the Woodlands, Texas, USA.

Achema 2018 – Call for Papers for Congress and Praxisforums

Contributions to the congress program and Praxisforums of Achema 2018 can be submitted as of now. Scientists from industry and research institutions are invited to submit their papers until September 22, 2017 via internet. About 800 presentations at Achema from June 11-15, 2018 will showcase results from application-oriented basic research through to applied research and development.