In mid-December 2005, KSB Aktiengesellschaft, Frankenthal, Germany, will be shipping out two of the biggest cooling water pumps the company ever built. The pump's installed depth below the installation level will be about 18m. 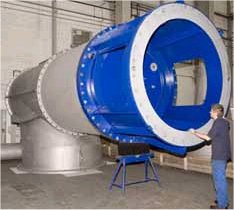 elbow of one of the biggest cooling water pumps ever built by KSB (photo: KSB).

Each unit weighs nearly 130 tonnes, with the 4,600-kW electric motor alone accounting for 50 tonnes. Running at their design speed of roughly 300 rpm, each pump will deliver more than 16,000 litres of seawater per second at a discharge head of just 22 metres. The pumps' medium-lubricated ceramic plain bearings need no external water supply for starting and running.

Since the seawater to be pumped is very aggressive, all wetted parts are made of high-quality duplex stainless steel. Back in August of 2004, KSB received the order for a total of eight such units from Huaneng Power International, Inc. in China. When finished, Yuhuan Power Station will comprise four supercritical 1,000-MW units and constitute one of the world's most modern power plants. 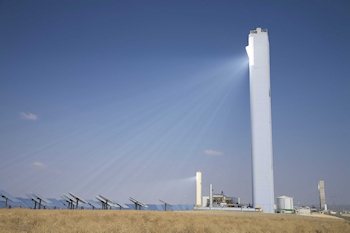 Sulzer Pumps has been selected in 2012 for the supply of pumping solutions for several Concentrated Solar Power (CSP) projects in Spain and India. The scope of supply for the orders includes the design, manufacture and installation of cooling water pumps, feed water pumps, condensate extraction pumps and auxiliary pump packages.

In July of this year, KSB Aktiengesellschaft Frankenthal (Germany) will supply twenty-three pumps for a drilling platform in the “De Ruyter” oil field. Canada’s biggest oil producer is having the 12,500 t platform built in the Netherlands and is planning to moor it to the seabed at a depth of 35 metres some 60 km to the north-west of The Hague in the summer of 2006.