Celebrating a Milestone Where It All Began

40 years of operations in the US is being celebrated across the North American country. Also in Fresno, California, the birthplace of Grundfos’ American business. 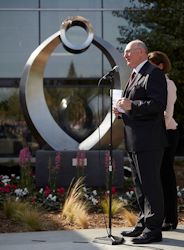 Niels Due Jensen presented the facility with a sculpture by the Danish artist Jørgen Pedersen, who has created numerous sculptures for Grundfos locations around the world. (Image: Grundfos)

November 14th turned out to be a very memorable day for Grundfos in Fresno. On that day, more than 165 customers, dignitaries, former and present Grundfos employees as well as company executives gathered to celebrate the company’s 40th anniversary in the U.S. at the place where it all began. Niels Due Jensen, chairman of the Poul Due Jensen Foundation, reflected on Grundfos’ history in the country.

"This milestone is incredibly significant because in only 40 years Grundfos has grown into a strong competitor in the U.S. pump market", Niels Due Jensen said. "It was one of my father’s biggest dreams to establish his company here in the US and I think he would have been very proud to see the results of all that hard work and dedication", he added.

He highlighted the achievements of Jerry Cook, the first president of Grundfos USA who was instrumental in building the foundation for the American company. As a member of three Grundfos boards, Jerry Cook continues to guide the direction of the company today.

"We are here today because of extremely dedicated and unselfish employees, managers, representatives and distributors who were willing to make the sacrifices necessary to build Grundfos as a world-class pump company in the US", Jerry Cook said.

In addition to looking back on Grundfos’ past in the United States, the event also focused on the company’s future.

"Looking ahead, we have a strong belief that we can reach $1 billion USD in turnover", said Søren Ø. Sørensen, Grundfos Group executive vice president. "We have the foundation for growth and we believe we have the potential for continued success in this country", he continued.