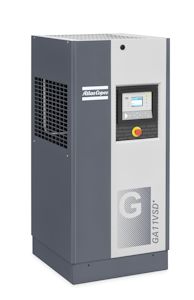 This breakthrough in energy efficiency is made possible by Atlas Copco’s own 100% patented interior permanent magnetic (iPM) motors which drive, and form the heart, of the new GA 7-15 VSD+ compressor range. The new iPM represents an enormous change as it is the first time Atlas Copco has manufactured the motors for its compressors.

The vertically mounted, IP66, oil-cooled, iPM motor, was specifically designed by Atlas Copco to match its screw element, and is fully enclosed, making it extremely reliable and maintenance-free. Significantly, the use of Atlas Copco’s own innovative direct drive motors, which are IE4 certified to the highest levels of motor efficiency, means that the GA 7-15 VSD+ out-performs comparable fixed speed compressors even at full load. This represents a new benchmark in energy efficient compressor technology and could enable all small compressor users to eventually switch over to variable speed drive compressors in the future.

With the GA 7-15 VSD+ Atlas Copco has re-designed the conventional layout of a compressor. Instead of the normal space-taking horizontal design, the new compressor has an innovative vertical layout that provides a canopy size 55% smaller than traditional compressor designs. This extremely small footprint (610 x 630mm), allows the GA 7-15 VSD+ to be placed right on the production line. Since only two panels need to be removed for servicing, it can even be placed against a wall. As a result, plant managers are able to save valuable floor and work space, as well as easing maintenance access and installation.

When developing the GA 7-15 VSD+ range Atlas Copco looked at every single element to identify where extra efficiencies could be gained. For instance, on top of energy savings the new compressor range provides a huge leap in Free Air Delivery (FAD) of 12%. In addition, the new compressor runs more quietly than ever, at 62 dB(A), thanks to the integration of an ERP 2015 compliant efficient fan motor that reduces electricity consumption and noise levels. The low noise levels are further aided thanks to the compressor having separate compartments for the drive train and cooling system. As an additional option, a full feature version of the GA 7-15 VSD+ is available with an integrated dryer.

During development the GA 7-15 VSD+ compressor range was extensively tested to prove its reliability and energy efficiency. Since 2009, Atlas Copco has been running 25 endurance units in the field. In addition, the new compressor range was sent for third party verification and extensive testing by independent testing laboratory Laborelec, which substantiated the claims for energy savings.