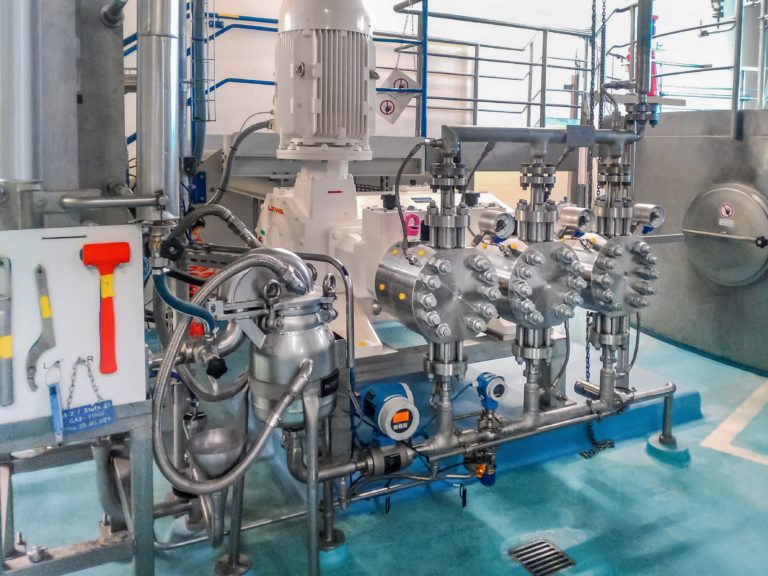 The Swiss subsidiary of Dutch company DSM Nutritional Products AG uses the spray drying method when producing vitamin and carotenoid powders for the pharmaceutical and food industries. The procedure uses pump technology to convey various emulsions into a spray tower, where they are dried into powder. But the feed and booster pump that was being used proved to be an uncertainty factor because the diaphragm required for the pumping process tended to tear when the pump was started up. Generally, such production interruptions can be corrected through immediate maintenance and repair work. However, it is very expensive to replace a diaphragm or an entire system. DSM was in search of an alternative and finally made a find when they talked to the pump experts at LEWA NIKKISO Switzerland, who recommended a LEWA triplex process diaphragm pump for the spray tower application. The drive unit features a safe start-up mode that keeps the diaphragm located in the neutral position, and continuous regulation using an integrated monitoring system. Since the hermetically tight pumps are electropolished and CIP-approved, it is easy to fulfill the food industry's stringent hygienic provisions. The new process diaphragm pump was commissioned in April 2019.

"Pump technology plays a central role in drying oil-in-water emulsions for the food and pharmaceutical industries. These emulsions contain substances such as vitamins, carotenoids, or polyunsaturated fatty acids as active ingredients," explained Natalie Ibald, Plant Manager of Formulations at DSM Nutritional Products AG. "As part of the process chain, each pump is 100% integrated into the closed plant system. The pumps are used for conveying the mixtures into the spray tower." With the previous system, the risk of unforeseen interruptions to this process couldn’t be ruled out. As a result, the different emulsions could not be processed further. In other words, it was not possible to dry them into powder. The pump diaphragm was the reason: it was often too sensitive to withstand the stress placed on it when starting up the pump and would rupture. Replacing the diaphragm reduced the system's service life and sometimes meant that trouble-free operation could not be guaranteed.

In the course of searching for a reliable alternative, DSM got in touch with the Swiss subsidiary of pump manufacturer LEWA. "We were already familiar with LEWA NIKKISO Switzerland as a supplier of robust systems with long service lives in the SFP sector. To ensure trouble-free spray drying, we thought it would be smart to join forces with the experts from LEWA and come up with a design to solve the technical problems," said Ibald. DSM is committed to continually improving its processes and investing in technology. This commitment, along with prior experience with the short service lives of the previous pumps, led DSM to place special focus on reliable function and a robust design during the project planning phase. The list of requirements also included a substantial number of stringent hygienic provisions that had to be fulfilled. "Certain foods have provisions regarding microbiological purity that are many times more stringent than those for producing other food products," explained Ibald. "This meant that the new feed and booster pump had to meet these more challenging conditions and every type of contamination had to be ruled out to produce the widest possible variety of products on the system."

After a visit at the company premises to consider the spatial and technical parameters, LEWA NIKKISO Switzerland recommended a type G3F triplex process diaphragm pump for the spray tower application. This pump features a completely secure start-up operation, since a spring continuously holds the integrated sandwich diaphragm located in a neutral position. "This protects the diaphragm against incorrect positioning and prevents it from being damaged while the pump is starting up, increasing system availability substantially," said Pietro Pettoruto, Managing Director at LEWA NIKKISO Switzerland AG. "And the LEWA triplex is controlled using a pressure relief valve that is installed in the hydraulic part and can be configured for the specific situation." Thus the pump can be adapted to different operational situations in order to prevent any overloads that may arise. This ensures that the unit has a long service life and smooth regular operation for the entire system.

In addition to the pressure relief valve and the spring control, the design of the diaphragm also plays an important role in ensuring reliable pump operation. The patented sandwich diaphragm consists of two separate PTFE diaphragms that are extremely long-lasting. They are connected to each other through positive interlocking during the discharge stroke and mechanical force-fitting during the suction stroke. "This makes the pump hermetically tight and effectively prevents external contamination," explained Pettoruto. As an additional safety feature, the DPS monitoring system from LEWA continuously monitors the condition of the diaphragm. The monitoring unit promptly displays any damage to the device that leads to increased pressure in the diaphragm space. "This makes it possible to carry out preventive maintenance and repair work before the diaphragm even begins to rupture and potentially contaminates the pumped fluid," Pettoruto explained. "Thus it is usually unnecessary to switch the pump off right away, which means that neither the pumping process nor spray drying are negatively impacted to a significant extent." If damage to a diaphragm is detected, production can continue without any problems up to a planned maintenance stop. The components can then be replaced quickly and easily by releasing the cassette for the assembly.

The hermetically tight design of the process diaphragm pump does more than just ensure reliable continuous operation. It is also a central component for fulfilling the stringent hygiene provisions that the spray tower application is subject to. The LEWA triplex maintains a hermetically tight space without dynamic seals, guaranteeing completely clean and aseptic production conditions. All pump heads that come into contact with the product are also electropolished, which makes it possible to ensure FDA-compliant pump operation.

Because the pump can be cleaned in place (CIP) using different alkaline and acidic agents and without prior dismantling, it is possible to meet the special requirements for baby food as well. "The provisions for baby food are 1,000 times more stringent than those for other products in the food sector," explained Pettoruto. "Thanks to the hermetically tight design, electropolishing, and CIP cleaning, we were able to rule out any contamination of the pumped medium and clearly meet the required hygiene standard."

The first quote was received in June of 2018 and in September of the same year, DSM Nutritional Products AG placed an order for the triplex process diaphragm pump. In operation since April 2019, the pump has become an indispensable part of production at the plant in Sisseln. "In every phase of the project, LEWA NIKKISO Switzerland demonstrated quick response times and well-founded expertise, which made a key contribution to implementing the project successfully," said Ibald. "Our specifications with regard to quality, robustness, and hygiene were followed to the letter in this project. As a result, our production has become noticeably more efficient and reliable."