Packaged pump sets from Armstrong have speeded up construction of a major new complex for the media industry in the north of England. 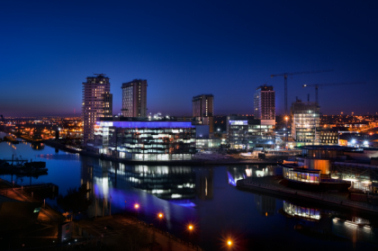 MediaCityUK developed by Peel Media at Salford Quays, will be the new headquarters for BBC North from 2011. In addition to creating new television and radio broadcasting facilities, the development includes offices to house around 2,500 BBC staff from five London-based departments and all programming from the BBC’s current headquarters in central Manchester. Spread over 36 acres of land alongside the Manchester Ship Canal, the project involves a total investment by Peel of £500 million. In addition to being a major move for the BBC, MediaCityUK is also a keystone project for Salford City Council and will include a new higher education campus for more than 700 Salford University students.

For the final phase, which includes the construction of a trigeneration scheme utilising cooling water from the nearby canal, Armstrong has been selected, by Vital Energi, to provide the large pumps which will be the power house of the scheme. Vital Energi is responsible for the complete design, construction, installation and commissioning of the trigeneration system and distribution pipework.

The Armstrong Series 8000 range comprises complete packaged pump sets incorporating elements of pre-design and the benefits of off-site manufacture. The central hub of each Series 8000 pump set has been pre-designed by Armstrong to offer the optimum solution for that duty incorporating components that are guaranteed compatible and balanced. Working from this starting point, the customer then, during specification, configures the package to meet the specific requirements of the application. This reduces the time required for design and specification, and ensures that the resulting system will always excel in areas such as energy efficiency, reliability and lower lifetime running costs.

The packaged sets for MediaCityUK were constructed off-site at Armstrong’s specialist facility in Halesowen and were delivered to site ready-assembled and mounted on pump skids requiring only final connection and commissioning. This approach drastically reduced on-site installation time and minimised health and safety risk for this major construction project. As the sets arrived assembled and tested, in line with the planning schedules of the contractors, the potential for unexpected bottlenecks was avoided enabling the project to progress more smoothly.

The specification of variable speed Armstrong IVS models for these packaged pump sets will ensure that the HVAC plant delivers best-possible energy efficiency to satisfy the requirements of the government’s CRC Energy Efficiency Scheme without the complexity and cost generally associated with variable speed systems.

The integrated inverter, attached to the body of the IVS pump itself, enables the pump to calculate its own speed requirements based on the load placed upon it at any one time. Embedded within the memory of the speed controller are pump performance curves for differing speeds, including power, pressure and flow data across the flow range of the pump. So, as long as the inverter can identify the power and speed of the pump, it can carry out the necessary calculations to determine the hydraulic performance and position in the pump’s head-flow characteristics. The speed controller then regulates the pump accordingly to ensure that only the required energy for its current base-load is used.

This means the pump is self-contained, capable of operating without a centralised inverter, and without the need for differential pressure sensors within the system. Enabling the pumps to work highly-efficiently at part loads will be of particular importance for the studio block which has varying levels of occupancy and demand dictated by production and transmission schedules.

Wayne Rose, Marketing Director of Armstrong said, “We are extremely proud to see our equipment playing such an important role in this prestigious project. Our off-site constructed plant rooms and packaged pump sets are perfect for major, complex projects like this, bringing immediate advantages during design and build. But the benefits of the equipment won’t stop there. Our IVS pumps will ensure that the building performs in the top tier throughout its lifetime in the areas of energy efficiency and carbon reduction.” 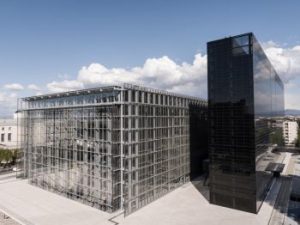