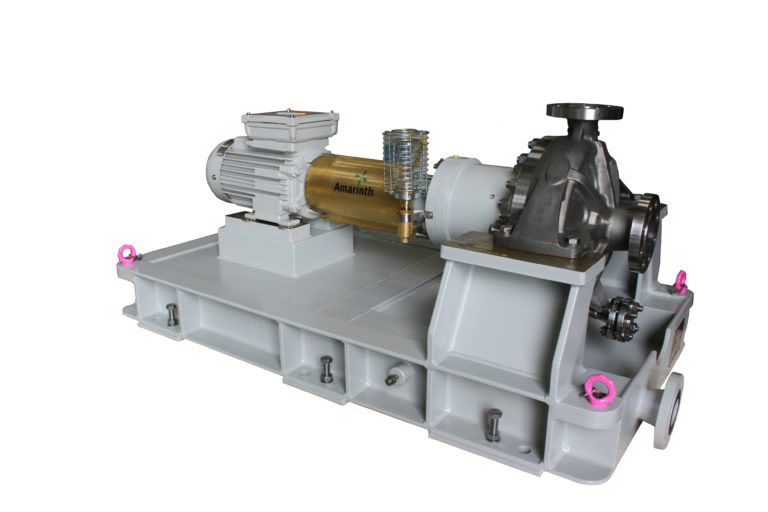 The Edvard Grieg oil field is situated approximately 150km off the Norwegian south-west coast with a water depth of 110 metres. Sensia was supplying a sampling and monitoring skid for the oil rig operating in the field but was finding it difficult to fit a standard API 610 horizontal pump with a Plan 53B seal support system in the extreme space restrictions of the platform.

Amarinth has a wealth of experience in designing bespoke solutions for challenging offshore projects such as this and so Sensia approached the company to find a way of packaging an API 610 horizontal pump with Plan 53B seal support system that could fit the tight space constraints. However, after reviewing the constraints, Amarinth concluded that even locating the seal support system separately to the pump it was still not possible to fit the pump and seal support system within the available space.

The Sensia monitoring equipment takes a sample from the main process line and so the duty of the pump and the sealing of the process fluid was critical. Amarinth started thinking more laterally about how it could reduce the systems overall footprint whilst retaining the same essential centrifugal pump design. After evaluating several options, Amarinth proposed using one of its API 685 magnetic drive pumps in place of the original API 610 pump and Plan 53B seal support system.

In a traditional API 610 centrifugal pump, the Plan 53B seal support system applies fluid pressure to prevent the process fluid from leaking around the mechanical seal at the pump shaft. In an API 685 magnetic drive pump, a hermetically sealed housing contains any process fluid in a closed system and the power transmission occurs contact-free through magnets from the drive shaft to the process wetted output shaft, negating the need for any seal support system. The use of a magnetic drive also has the additional benefit of shortening the length of the overall pump and motor assembly compared to a traditional mechanical seal and coupling.

Using an Amarinth API 685 magnetic drive pump, the exact same duty of the original API 610 pump could be delivered, which was crucial for the Sensia equipment to work correctly, but in a much more compact design that could fit within the space constraints of the rig. The API 685 magnetic drive pump was manufactured in super-duplex stainless steel to NORSOK M650 specifications and Amarinth manufactured, and delivered the pump within 28 weeks, including the witness testing.

Oliver Brigginshaw, Managing Director of Amarinth, commented: “One of Amarinth’s core strengths is its design capability and agility for just these sorts of challenging applications. We were delighted to be able to deliver our API 685 solution to Sensia for this demanding project and look forward to working with them on future projects as they deliver automation solutions to the oil & gas industry around the world.”