A Milestone for Hydropower: Successful Startup of Frades II

With its increasing use of solar and wind power, Portugal has for many years been focusing on the flexible and dynamic potential of pumped storage to stabilize electricity grids. In the north-west of the country, the new pumped storage plant Frades II has been in operation since April 2017. 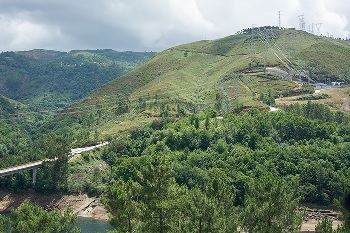 The pumped storage power plant is located in the north-west of Portugal and is installed in an underground cavern. (Image: Voith)

Technology Group Voith supplied the plant with two variable speed pump turbines each with a rated output of 390 MW, two asynchronous motor-generators with a rated output of 440 MVA each, the frequency converter and control systems as well as the hydraulic steel components. The generator sets are the largest and most powerful of their kind in Europe. The plant operator is the Portuguese utility company Energias de Portugal (EDP).

The new system offers two advantages: On the one hand, the plant can respond faster and more flexibly to the active and reactive demand from the power grid. On the other, it offers additional stability in the event of a drop in voltage, reduces the likelihood of a power failure and enables a fast restart if a power outage does occur. "If the grid voltage drops to 5% of its normal value, the Frades II power plant can remain stable for 600 milliseconds, that is four times longer than conventional turbines with fixed speeds. In emergency situations this time difference can be crucial when there is a need to prevent a large-scale power outage," says Thomas König.

The new Frades II pumped storage power plant called for innovative thinking of Voith s engineers in a large number of areas. For example, the rotor of the motor-generator had to be completely redesigned in order to cope with the high centrifugal forces, the much higher current and the voltage from the frequency converter. The converter for the excitation is larger, heavier and 25 times more powerful than in a comparable synchronous unit and therefore also requires a new electrical protection system.

EDP reaps the benefits of these innovations, as Lars Meier, Head of Technical Sales and Tender Management at Voith Hydro in Heidenheim, explains: "The motor-generator technology with variable speed at Frades II increases the total number of operating hours for the plant. More operating hours and higher availability generate more revenue and ultimately more benefit. This is one of the reasons why comparable power plants can very quickly write off the necessary investments. Another fantastic spin-off of the technology is the increased operational efficiency overall."

Prototype plant for other projects worldwide

The Frades II pumped storage power plant makes a significant contribution to stabilizing the grid and to the ongoing expansion of power generation from renewable energy in Portugal. Following the successful startup, the biggest variable speed pumped storage plant in Europe is considered the flagship project for further plants worldwide.

The pumped storage power plant is located in the north-west of Portugal and is installed in an underground cavern. It is not designed as a standalone facility but represents an important addition to the eight plant Cávado-Rabagão-Homem cascade system. The difference in height between upper and lower basins is 420 meters. Voith was awarded the order to equip the Frades II pumped storage power plant in the fall of 2010.