IFAT, which takes place from May 30 to June 3, 2016 at the Messe München exhibition center, is celebrating its 50th birthday. It started out back in 1966, as the “International Trade Fair for Sewage Technology”. Taking part in that premiere were 147 exhibitors from nine countries, and 10,200 visitors from 40 countries—and the exhibition space was 18,000 square meters. 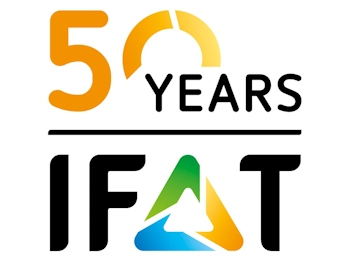 Of course everything was much smaller than today, and quite different, as we heard from four people who experienced those early days.

For example Professor Dr.-Ing.E.h. Hermann H. Hahn PhD, who remembers very well what the situation was like in the 1960s: “The first IFAT took place at a time when the word ‘environment’ was not on everybody’s lips like it is today. But this trade fair played its part in raising awareness about the global nature of these challenges.” Professor Hahn is still enthusiastic about that premiere: “For the first time I saw that what I had studied at Harvard University could be of worldwide interest, and gather together an international trade audience from science and engineering.”

Certainly such an event was urgently needed, as recalls Horst J. Schumacher, publisher and editor of Kommunalwirtschaft, a magazine for municipal services and authorities: “Right up until the 1960s there was no trade fair dedicated to the theme of water and wastewater. When attention finally did focus on it, many were surprised, and even shocked at the condition of the water pipes and sewers. Then Messe München came up with the idea of starting IFAT.”

That idea turned into a 50-year success story. Tom Kallmann, at the time the representative of Messe München in the US, comments: “All I can say is: ‘res ipsa loquitur’—it speaks for itself. The concept behind IFAT, which has been continually developed over the years and adapted to the needs of the environmental technology sector, shows that the people behind this event were very forward-thinking and visionary.” Manfred Fischer, who experienced the 1966 premiere as a young construction engineer with two years professional experience, adds: “The development of IFAT over these 50 years is amazing. Back then the visitors to the show were mostly a small family of German wastewater engineers. But today the participants come from all over the world.” Fischer himself still enjoys coming to the show: “I have indeed attended all 18 of the past editions of IFAT. It’s just a shame that the next one is only the 19th, so not a ‘round’ number, to match the 50-year anniversary.”

But nobody will be worrying about that little flaw, when over 3,000 exhibitors and 135,000 visitors converge on Munich to take part in the 50th birthday edition of IFAT.