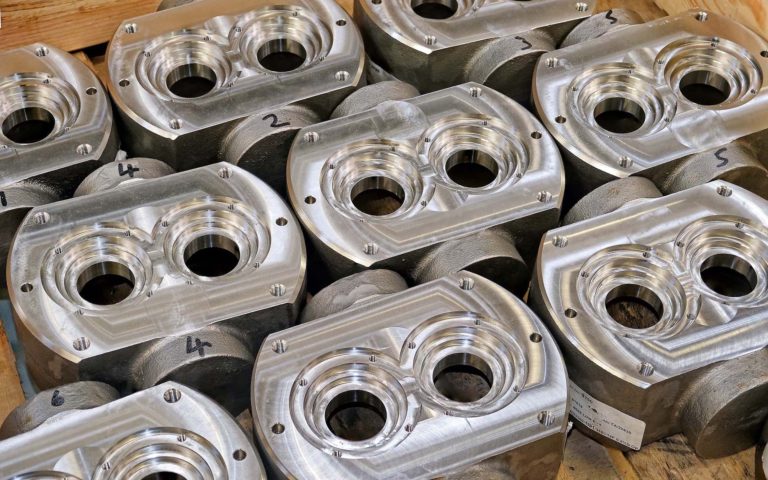 A batch of pump cases ready for delivery, showing the front face features. 1,500 are produced by Metaltech annually for one customer, representing more than half of the subcontractor's total output. Work for the pump industry accounts for 80 per cent of the firm's turnover. (Image source:

They include a drastic reduction in set-up time that lowers economical batch size by a factor of four, shorter lead-times, faster cycles, savings in the cost of tooling and less wear on the machine tool.

Additional advantages of the new production route are reductions in power consumption and in space taken up on the shop floor. Both are in short supply at the firm's Hailsham factory and were the main drivers of the company's desire to find an alternative manufacturing process.

Expensive, 500 mm or 630 mm twin-pallet, 50-taper horizontal machining centres (HMCs) with box ways and high spindle torque, of which there are nine on site, together with CNC lathes have underpinned pump body production since the company was established in 1976. The components are typically produced in five operations on three machines.

A 40-taper, 5-axis, vertical-spindle machining centre, a German-built Spinner U-620 without a pallet changer supplied as a turnkey package by sole UK agent Whitehouse Machine Tools, now machines the components in two operations. Installed and operational within one week during November 2019, the cell heralds a progression at Metaltech from the use of raw power to smart machining methodology.

The pump bodies in question, of which there are eight types ranging in diameter from 160 to 280 mm with numerous different port details, are produced for a customer in batches of 50 to 60 to a monthly schedule that might include as many as 15 component variants. Sometimes orders were impossible to fulfil and discussions had to take place regarding alterations to the schedule.

That was because the traditional machining process takes 10 to 15 hours to set up. After skimming the back face of a 316 stainless steel casting, it involves roughing the same face on an HMC and then roughing the front face, bores and ports on the same machine. The part is transferred to a lathe to turn the port details using single-tip boring bars. It then returns to an HMC to re-skim either the front or back face to provide a location for mounting the part on a window fixture to finish-machine both faces. Production of a batch of 50 to 60 bodies takes four weeks by this method.

In contrast, set-up on the Spinner takes just one hour and the new process route is completed in two clampings, which means that 10- to 15-off can now be produced economically. In the first operation, roughing and finishing of the back face and the interpolated bores are carried out by respective 16 mm diameter, solid carbide end mills from MA Ford.

A Schunk pneumatic zero-point fixturing system presents the part to the spindle for the second operation in a time that rivals the speed of an automatic pallet changer. A probe double-checks the datum and that the bores machined in the first operation are the correct size. Face mills complete the rough and finish machining on the front of the pump body. The savings offered by this method of production sees all 50 to 60 bodies completed in one week rather than four.

Metaltech's managing director Doug Murphy commented, "We sent drawings to Whitehouse and they came back with set-up and cycle times on the Spinner that looked really good, which was largely down to producing the bores by circular interpolation milling instead of single-point turning on a separate lathe.

"We were worried that it would be difficult to hold the required 20-microns diameter tolerance using this method. However, our fears were allayed by a set of three cutting trials the supplier carried out in its Kenilworth showroom. We checked the bores on our CMM for size, ovality and taper and they were within microns."

Technical director Mick Bignell added, "Another concern we had was that the new method of roughing and finishing the back face completely before turning the part over to machine the front face and outside would put stress into the casting, causing distortion and movement of the datums. This also proved to be unfounded.

"We had to look carefully at the surface finish of the internals and bores, as these rotary lobe pumps are used in the food industry and any roughness could cause hygiene problems. External finish is also important to our customer, as the polished appearance is a sales advantage. The interpolation milling cycles established by Whitehouse have proved to be equal to these requirements and produce a finish equivalent to single-point turning."

Savings in tooling costs result from the new production method. The first thing to note is that on the HMCs, which use large indexable-insert cutters for roughing, the 60-station tool magazines are not big enough to accommodate all cutters needed for every pump variant. On the Spinner, with the new process allowing commonality of tooling, the 32 pockets are sufficient to machine the complete range.

Using a waveform rough milling strategy with the 16 mm diameter cutter at high speeds and feeds, typically 2,700 rpm and 2,400 mm/min, rapid metal removal rates are achieved without unduly heating and stressing the part, helping to maintain accuracy. It is largely this lighter machining that allows the BT40 vertical-spindle machine to attain the same level of precision as a 50-taper HMC when cutting tough stainless steel.

Tool life is very good, according to Mr Bignell. He said that one 16 mm end mill can rough 22 pump bodies, while a finishing end mill had completed 50 parts and was half way through the next batch at the time of interview. A further benefit of these £120 solid carbide cutters is that two or three regrinds are possible at a cost of £25 per time. Overall, the lower cost of tooling represents a monetary saving that Mr Bignell describes as "immense".

A further economy derives from reduced power consumption. The Spinner draws between 10 and 20 amps whereas an HMC pulls 30 to 40 amps. Mr Murphy estimates that overall electricity usage will fall by two-thirds using the new pump body manufacturing process.

He concluded, "As demand for these pumps is continually rising, finding more efficient ways of manufacture is imperative. The reduction in set-up time from as much as 15 hours to one is a big game-changer with the Spinner, as is the elimination of work-in-progress.

"The process has lowered the economical batch size and is helping not only to increase flexibility of production but also to reduce the cost. Also, by handling the parts fewer times, there is less risk of scrap. The customer also benefits, as they are able to reduce stocks levels.

"The ability of Whitehouse to turnkey this installation successfully has given us a path to expansion that was difficult to see before. We were out of space and out of power here in Hailsham and the high cost of relocation was not an option.

"The Spinner U-620, requiring half the floor space of an HMC and one-third of the power yet delivering the same quality of parts four times faster, has been a sea change for us." 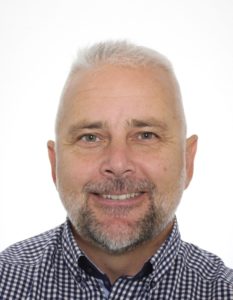 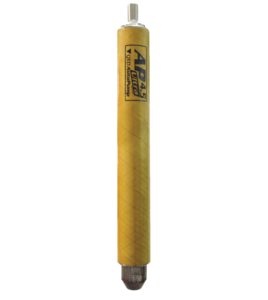 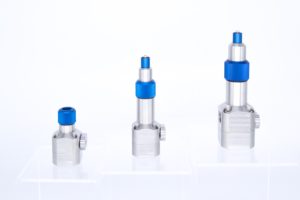 Special requirements require special measures. To meet the requirements of customers and sales partners, preeflow has developed a stainless-steel kit for the eco-PEN dispensers 300, 330 and 450. 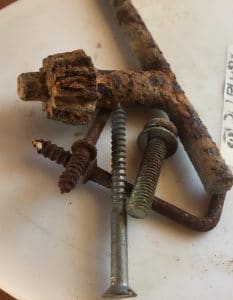 Time to Fight Corrosion – For the Environment’s Sake

The global cost of corrosion exceeds US$2.5 trillion annually, or three percent of global GDP. Moreover, the environmental consequences are enormous. 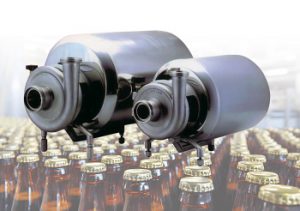 Transferring liquids in food, brewing, pharmaceutical and other similar hygienic process applications requires reliable, easy-to-clean and easy-to-maintain pumps. Liquids handling specialists Pump Engineering offer a wide range of pumps which are ideal for these situations. For example their range of CSF CS, CSA and CSM centrifugal pumps are capable of handling capacities from 1 to 550 m3/hour at heads up to 155 metres.