The modernization of the plant by replacing the existing jet turbines with high-performance Gamma 400G-8 turbines in foundry design enables a significant increase in performance and significant savings in operating and maintenance costs. The ROI is already achieved after 1.1 years. (Image source: Rösler Oberflächentechnik GmbH)

With the retrofit of the existing system used in a foundry, a leading manufacturer in drive and control technology decided on a significantly more cost-effective and equally effective alternative. The blasting system was modernized with the high-performance Gamma 400G-8 turbines from Rösler in foundry design. The result of the turbine replacement is two thirds lower maintenance and over 34 percent lower operating costs as well as a 45 percent higher blasting power. And that with an amortization period of just over a year.

The turbines in blasting machines are highly stressed components. Over the years, this leads to higher and higher maintenance and operating costs, also caused by excessive energy consumption. In addition, the beam power often no longer meets the capacity and quality requirements. In order to be able to continue blasting in an economical, needs-based and competitive manner, companies usually invest in a new blasting system.

This problem was also faced by a well-known manufacturer of control and drive technology in a foundry. Through contact with the manufacturer-independent modernization of blasting systems, the TuneUp brand from Rösler Oberflächentechnik GmbH, the company's project managers learned about the possibility that third-party products could also be brought up to date with the latest technology. After a comprehensive condition analysis of the existing blasting system, the retrofit specialists not only worked out a suitable solution, but also created a realistic amortization calculation. The proposed retrofit concept was convincing both technically and economically.

Productivity increase and cost reduction through turbine replacement
A decisive part of the modernization was the replacement of the two existing jet turbines of the plant manufacturer with 22 kW. The decision was made in favor of the high-performance turbines Gamma 400G-8 in a robust foundry design and with a drive power of 22 kW. They each have eight throwing vanes in a "Y" design with a calculated angle of curvature. This results in an extremely high discharge speed as well as a high-precision blasting agent discharge and thus an optimal degree of efficiency. These special properties of the gamma turbines ensure a 45 percent increase in jet power, with which the desired increase in capacity can be implemented.

Another plus of the new high-performance turbines is their energy-efficient operation. It makes a significant contribution to reducing operating costs, which are around 34 percent.

Maintenance costs reduced by more than 66 percent
In addition to the increase in performance, the extraordinary design of the throwing shovels enables them to be rotated and used from both sides. Compared to conventional throwing shovels, this, in combination with the resistant material - forged tool steel - results in a service life that is three times longer, depending on the abrasive used. The change is easy using an innovative quick-change system with the turbine installed. The otherwise usual and time-consuming removal of the impeller, metering device and inlet pipe is no longer necessary. In total, this reduces maintenance costs by more than two thirds.

Fast amortization strengthens competitiveness
Based on the previous utilization of the blasting machine, the increase in productivity and cost savings achieved through the retrofit, the return on investment (ROI) is already achieved after 1.1 years. The technical execution of the plant modernization and the rapid amortization give the plant operator the opportunity to increase income and thus strengthen and expand the competitive position. 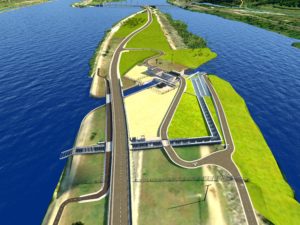 Cooperation between Voith and CNR in France to be Continued

Total Lubrifiants is delighted to celebrate a memorable milestone paving the way for the future: the 50th anniversary of TOTAL PRESLIA, its range of turbine oils. 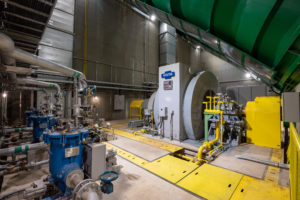 Tradener has just commissioned the small hydropower plant Tamboril, located on the São Bartolomeu River in the Brazilian municipality of Cristalina (state of Goiás) with the support of Voith. The power plant represents a milestone as the company’s first hydropower generation project.