The world market for pumps used by industry, municipalities and for irrigation will grow to $45 billion per year in 2017 adding more than $7 billion to current annual sales. This is the latest forecast in Pumps: World Markets published by the McIlvaine Company. 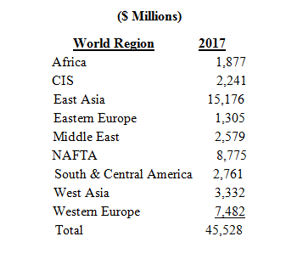 East Asia will account for more than 33 percent of the market in 2017. The growth in this region will be driven mostly by new infrastructure and heavy industrial spending. More power plants will be built in this region in the next five years than in the rest of the world combined. The investment in municipal wastewater treatment and drinking water facilities will also outstrip the other regions. Because of aridity in much of the region, the investment in irrigation pumps will be substantial.

The growth in NAFTA will be led by the non-conventional oil and gas sector. Pennsylvania, Texas and other states in the West will expand their production of gas and oil from shale. This will generate very substantial investments in pumps. The pumps to deliver the fracturing water at high pressure to locations 12,000 feet below the surface are already in short supply as manufacturers struggle to meet a $1 billion per year demand.

Western Europe will be a slow growth market characteristized by a large percentage of replacement pumps and parts for existing plants as opposed to pumps for new plants. Eastern Europe will reflect growth in expenditures to meet environmental regulations required for European Union membership.

Middle East expenditures will rise as the region increasingly becomes a supplier of refined rather than raw products. Pump sales in this region will also be boosted by the desalination plant investments. There are not only pumps to overcome the high resistance of the reverse osmosis membranes but additional pumps to recover the energy in the rejected cross-flowing seawater.

The ocean will play a role in several ways. New regulations for ballast water treatment and scrubbing of vessel stack emissions will boost the sales of pumps for existing and new vessels. Expanded production of oil and gas from subsea sources will require many large and expensive pumps.