The market for products and services to remediate groundwater and soils will exceed $40 billion annually by 2015. While the U.S will remain the largest market, its share will shrink substantially as expenditures soar in war ravaged and developing countries. 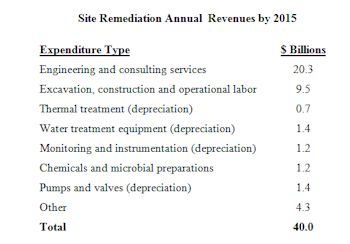 In China, 30 percent of the usable land is considered contaminated. Soil remediation expenditures in China are predicted to reach $6.4 billion per year by 2015 or 15 percent of the total world market for that year.

FMC in a partnership with BCEG Environmental Remediation Co. and BRISEA will pursue this market with the offering of services and chemicals.

The market for chemicals and microbial cultures includes applications in pump and treat where activated carbon and other products are used to purify recirculating water. Chemicals which release oxygen and microbial consortia which foster in situ bioremediation have become increasingly popular.

Canada has begun the second phase of a 15-year plan to remediate 22,000 sites at a cost of $7.7 billion. The cost to remediate Canadian soil and water contaminated by petroleum hydrocarbon is estimated at $1 billion.

The market for continuous analyzers to measure contaminants in ground and surface water is growing at double-digit rates. One reason is the new reliance on monitoring and natural attenuation as a remediation solution. Another is the desire by would be polluters to establish baselines prior to the conduct of operations which are potentially harmful. The contamination of some water supplies in Pennsylvania could be natural and not a result of shale gas extraction. So shale gas operators are investing in baseline monitoring systems to protect themselves from future liabilities.

The participants in the market are increasingly international in their scope of operations. ThermoFisher is expanding both in terms of geographic reach and products to serve the remediation market. In selected Asian countries, it is marketing the remediation products of Regenesis. It plans to make China its second largest market after the U.S.

Large U.S. based consulting companies such as URS, Black & Veatch, AECOM and others are expanding their remediation activities internationally. To extend its sustainable remediation technical expertise and best practices across AECOM, more than 70 environmental practitioners have been trained on AECOM s new process for rapidly screening best management practices to improve remediation portfolio performance.