$3 Billion Centrifuge and Clarifier Market in East Asia Next Year

The market for centrifuges, clarifiers, hydrocylones and gravity type oil separators will exceed $7.3 billion in 2013. East Asia will lead the way with purchases of just under $3 billion. 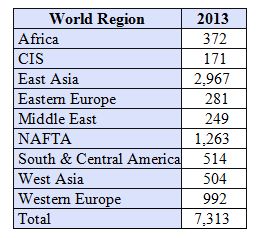 This is the conclusion reached in the latest update to Sedimentation and Centrifugation World Markets published by the McIlvaine Company.

East Asia is building large numbers of municipal wastewater treatment plants. These plants use decanter centrifuges, thickeners and clarifiers. The power industry uses clarifiers both on the intake as well as the wastewater. Hydrocyclones are used to separate the FGD gypsum in the scrubber systems utilized with coal-fired power plants.

A number of the large international suppliers are taking advantage of the large Asian market. Alfa Laval received 33 percent of its orders in the April-June 2012 period from Asia.

The mining industry is a large purchaser of sedimentation and centrifugation equipment. The markets in South & Central America and Africa are disportionately high in mining projects. However, Asia is also booming. Under a recently signed $20 million contract, Siebtechnik has begun delivery of a set of 40 large-capacity centrifuges to a Chinese potash producer.

The chemical industry in East Asia is growing faster than in other regions. Various Chinese adipic acid manufacturers are buying Ferrum pusher centrifuges for these processes.

GEA is selling centrifuges for recycling material in the Asian photovoltaic manufacturing industry. In its new five-year plan, China will extend photovoltaic capacity from just 1700 MW last year to over 15,000 MW by 2015. GEA has found that the silicon carbide which is the material used to make the wafers can be recycled. The residual material can be recycled based on a two step classification process. In the first stage, the decanter centrifuge removes the coarse silicon carbide from the slurry with relatively low g force. A second decanter which is connected in series operates with maximum available speed and removes the finer silicon carbide.

Neles’ Acquisition of the Valve and Pump Businesses of Flowrox Completed

Neles’ acquisition of the valve and pump businesses of the Finland-based technology company Flowrox has been successfully completed. With this acquisition, Neles expands its offering and exposure to the mining and metals industry.

A number of Bredel pumps from Watson-Marlow Fluid Technology Group (WMFTG) are proving highly successful in the circulation and transfer of waste return slurry from concrete slab manufacturing processes.