The 55th biennial Chem Show is making some major moves next year as it moves its 2013 dates from November to December and moves back upstairs to the 3rd level of the Jacob K. Javits Convention Center. 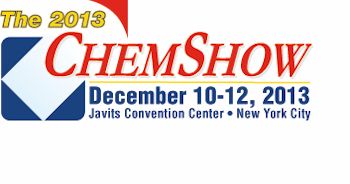 The 2013 Chem Show will celebrate its 98th year of serving the CPI industry December 10-12 in the Crystal Palace level exhibit halls at the Javits Center. “Based on feedback from our exhibitors and attendees, we felt moving the Show closer to the Holiday season and returning to the Crystal Palace level of the convention center would be welcomed enhancements to next year’s event,” said Clay Stevens, President of International Exposition Company, which produces and manages the Chem Show. “Mid-December is one of the most exciting times to visit New York City,” he added.

As North America’s leading CPI event, the Chem Show will showcase all the latest equipment and technologies from more than 300 of the leading industry suppliers from around the world. Several thousand process engineers, production/plant personnel and other CPI decision makers will come to the Show seeking solutions to their process challenges.

Once again, the Chem Show will offer its popular Show features including:

“As the economy continues to recover and companies add new capacity and replace older equipment, a December 2013 Chem Show will be ideally positioned for companies planning for 2014 and beyond”, Stevens predicted. He added that details would soon be announced about a robust educational conference.

The 2011 Chem Show hosted more than 300 exhibiting companies from 13 countries and attracted nearly 6,000 attendees. Since its first event in New York City in 1915, the Chem Show has become widely recognized as a valuable resource for CPI professionals to discover the latest products, trends and industry innovations.