The 65th AHR Expo, held January 28-30 in Dallas, Texas, has established four new all-time records for Southwest shows. More than 52,000 attendees (35,000 visitors) filled the aisles of the Dallas Convention Center to see all the latest products and technologies on display from 1,951 exhibiting companies covering 397,000 square feet.

The previous Southwest records were set by the 2007 AHR Expo that was also held in Dallas.

“We were very pleased with the attendance and the enthusiasm on the Show floor,” said Clay Stevens, President of the International Exposition Company that produces and manages the AHR Expo. “The aisles were packed for almost all three days of the Show.”

These sentiments were echoed by Kevin Stamets, Director Strategic Marketing for Trane, “The Show has been incredible – standing room only for us. I had no idea we would be packed in our booth the way we were for two days.” Brendan Sullivan, CMO of FieldAware, added, “AHR Expo has been a tremendous success for us. We gained a wealth of new business leads.”

In addition to the action on the Show floor, the world’s largest HVACR event also featured more than 100 educational sessions, three New Product and Technology Theaters, a Building Automation and Control Showcase, a robust software center and the presentation of the 11th Annual AHR Expo Product of the Year Award to Rheem Manufacturing Company.

“We believe the enthusiasm on the Show floor bodes well for the economic outlook of the HVACR industry overall, and AHR Expo 2014 next January in New York,” Stevens added. 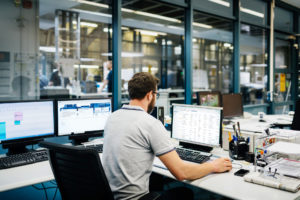